In many ways its easier to get attention these days, especially in the era of the information technology revolution, by saying things that make you sound like you’re from another planet. Or in Michelle Bachmann’s case, sound like you’re running for President, of another planet. Who wants to hear a politician say, “I’ll do what I believe is in the best interest of the country. I’ll make decisions based on what I believe is the best thing to do”. Every time there’s a politician or candidate who speaks like that, you can hear insomniacs snoring in the background, getting the best sleep of their lifetimes. Perhaps introducing their brains to sleep for the first time in their lives.

It’s the politicians and candidates, who say things, just to use Michelle Bachmann as an example who says things like, “same-sex marriage is the biggest threat to our national security”. I guess sometime before she said that, the United States won the War on Terror. I could’ve swore the War on Terror was a bigger threat. Or the national debt or deficit, unemployment were bigger threats. Perhaps Representative Bachmann misses the House Intelligence Committee meetings that she’s a member of, that released that information. But perhaps Barack Obama actually is God and fixed all these problems and hearing rumors that President Obama was God in disguise as a human being and President of the United States, was not a rumor, but a fact.

So now the biggest threat to American civilization is actually same- sex marriage. If you’re having a hard time reading that with a straight face, imagine how hard it was to write it. You know with the typing and everything, but hey maybe Representative Bachmann’s gay husband Marcus can fix the same-sex marriage issue, by converting gay people to straight. Its much easier I would say especially in America, because of our size and wealth, 310M people, the largest economy in the world and how far advanced we are technology wise and everything for Mentally Unbalanced people lets say to be nice, to get attention for themselves and whatever they think they are trying to accomplish.

The reason for is this is because of how abnormal the mentally handicapped are and they do and say things, that sane people just wouldn’t say or do. Mitt Romney only gets media attention for one of his speeches, when he says something that makes him seem out of touch. Like when he said he only made 400K$ giving speeches. Well 90% of the country would love to only 400K$ a year. But generally people don’t remember much if anything that Mitt said in one of his speeches.

And one of those reasons is, because Mitt one of the sanest people to ever run for President. The guy is about as exciting as a bowl of oatmeal, which might be insulting to oatmeal. But when someone lets again use Michelle Bachamann, says something that sounds so far out in left field, or right field in Michelle’s case, that they couldn’t see centerfield with binoculars or a telescope, it gets reported right away. Because its crazy, interesting and provocative. And gives the “mainstream media” something else to make fun of.

If you’re lonely and feel like you’re not receiving your fair share of attention, give a crazy speech, say things like “America should be less Socialist like China”. Take pictures of your sensitive area and post them on Twitter, especially if you’re a Public Official. It will always work and you’ll always get attention for doing, excuse the term doing crazy shit like that. But one thing it just might not be the kind of attention you’re looking for. But as the saying goes, all free media is good media. I know I said no more blogs about Michelle Bachmann until she runs for reelection for House. But this popped in my head. 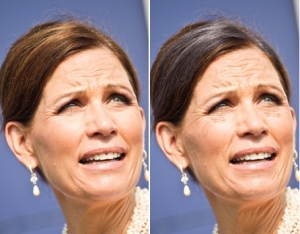