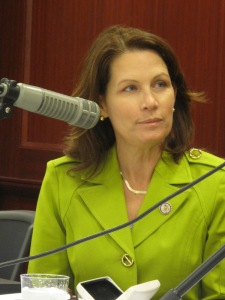 About three weeks ago after Representative Michelle Bachmann did Minnesota and the United States a favor by dropping out of the Republican race for president and then announcing a few days later that she wasn’t going to run for reelection to the House. That because of these things and that Michelle Bachmann would hopefully go home go back to the mental hospital, go back to high school and take a class on American history. Take a course about foreign policy and get the help that she needs. So in the future she’ll say less ignorant things and present them as fact.

Well that all sounds like a dream now and after she announced she’s running for reelection to the House. Hopefully House Democrats will give her a tough run this time, especially now that Representative Bachmann is very unpopular. Not only in her home State of Minnesota, but in her House district, thanks to her presidential campaign. After making a short story longer, I told myself that I was going to layoff Representative Bachmann, at least until her general election campaign in the fall. In the House and that’s assuming she wins the Republican primary, that might not be a safe bet after her presidential campaign, which is why she’s so unpopular in Minnesota right now.

So I found another ignorant thing that Representative Bachmann said in one of the November debates. When her presidential campaign was already on life support, something her political strategist Ed Rollins figured out. Which is why he resigned, but she didn’t figure out until January after getting just 5% of the vote in Iowa. During the November debate, Scott Pelley anchor of the CBS Evening News, asked the candidates something about the economy. And basically asked Representative Bachmann what is her economic policy, or something to that effect. She said in her own words, first she goes off about the LBJ Great Society and said that China doesn’t have things like cash transfers and Food Stamps as she called it. It’s no longer called Food Stamps.

And then Representative Bachmann said that “America should become less socialist like China”. Apparently according to Michelle Bachmann, America is more socialist than China. China being a country with state-owned industries. What’s the classic definition of socialism. The state owns the means and production of society. State-owned industries fits that like a glove. Now of course the People’s Republic no longer fits the classic definition of socialism. Which is good for them and the main reason why their economy is now the 2nd largest in the world, sorry Japan. Because they’ve privatized their economy and now have probably the largest growing private sectors in the world.

Representative Bachmann also said that China doesn’t have a welfare state unlike America. This is a person who serves on the House Intelligence Committee by the way. If being intelligent was a requirement to serve on that committee, Michelle Bachmann wouldn’t be qualified to serve on that committee. Article 14 of the P.R. Constitution China’s version of the U.S. Constitution, but obviously a hell of a lot different, states that the state meaning the P.R. Central Government builds and improves a welfare system that corresponds with the level of economic development in the country.

China has a Ministry of Human Resources and social welfare. That oversees a safety net that has programs like, cash transfers. Sounds like welfare or unemployment insurance right. Food assistance, sounds like Food Stamps right. Money for education for people who can’t afford to send their kids to school. Vouchers for health care and I’m sure other things as well. Representative Michelle Bachmann is a three term U.S. Representative from Minnesota, elected in 2006. The year Congressional Democrats took back Congress.

Michelle serves on the House Intelligence Committee, but she knows so much that isn’t true or just makes up things. As she goes along, she’s extremely partisan by nature, so maybe that’s her issue and that’s the closest thing I’ll say to being nice to her. Yet she’s constantly saying things that aren’t true. And hopefully as a result she won’t be back to serve in the 113th Congress next year.
Talking Points Memo: U.S. Representative Michele Bachmann- ‘We Should Be Less Socialist Like China”