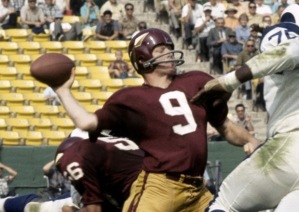 “Mike Richman had it almost perfect there. The 1960s Redskins looked more like an American Football League team than an NFL team, if you’re familiar with the AFL. Only that they were in the NF…”

Source: This piece was originally posted at FRS Daily Press Plus

Mike Richman had it almost perfect there. The 1960s Redskins looked more like an American Football League team than an NFL team, if you’re familiar with the AFL. Only that they were in the NFL and had to play by NFL rules. The AFL wanted to be a passing league with liberalized offenses were teams were not only encouraged to throw the ball, but throw it a lot and throw it deep. The Oakland Raiders of that era were not the only vertical spread offensive team in the AFL. The San Diego Chargers ran the same offense under Sil Gilman who was a huge inspiration for Al Davis.

And I mention this because again the Redskins as an NFL team obviously had to play by NFL rules. And back then and up until 1978 after Sonny Jurgensen had already been out of the NFL for three years the NFL rules back then favored the defenses. And big power-run ball control offenses. Where you ran the ball 3-5 plays or more, where you played field possession and hoped to get a big takeaway from your defense, a big return in the kicking game. Where you relied on your defense a lot to win the game. And hoped you had a big day running the ball and your QB hit some passes down the field and didn’t turn it over.

What made the Redskins special during the 1960s was not that they only had one winning season, which was under Vince Lombardi in 1969 at 7-5. (Who didn’t even lose in Washington) Or that they didn’t make the playoffs the entire decade. What made them special was that they went against the grain in the NFL. They had an 1960s AFL offense that was playing in a 1950s America NFL where it was almost considered immoral to throw the ball, or score quickly and take big chances on offense in order to score. And it wasn’t really by design either. They didn’t have a strong offensive line, they couldn’t run the ball worth a damn for the most part and their defense barely stopped anybody during this period.

But what the Redskins had was arguably the best quarterback in pro football during this era other than John Unitas in Sonny Jurgensen. A QB that could get rid of the ball quickly, who had a strong accurate arm and touch and who moved well in the pocket. As well as perhaps the two best receivers on the outside in the NFL during that decade in Charley Taylor and Bobby Mitchell who both had good size, hands and speed. And then you add Jerry Smith in the middle at TE who should also be in the Hall of Fame and you’re talking about an offense that could put up 25-30 points a game against anyone. Even if they’re giving up more than that in every game.
Redskins Historian: The Redskins in The 1960s and Their Explosive Offense on NFL Films