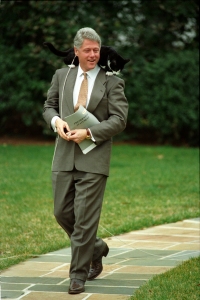 Before Bill Clinton became President of the United States, Liberal Democrats were seen as tax and spenders, soft on Crime, soft on defense, soft on welfare, anti-private enterprise, anti-success, anti-wealth, pro-centralize power, “that the Federal Government had all the answers to America’s problems”. We were seen as anti-American, Unpatriotic anti-religious and fiscally irresponsible, deficits don’t matter.

How times changed in just eight years because by 2000 Democrats and a lot of that credit should go to President Clinton, were ahead of Republicans on a lot of these issues. We were seen as the party of fiscal responsibility, we were now leading Republicans on tax cuts and foreign policy, crime and many other issues. President Clinton brought a real liberal agenda to the United States. Not the liberal agenda which is how liberalism has been stereotyped in America.

But a liberal agenda that was based on what liberalism is actually about. Different from progressivism or democratic socialism and its very hard to tell the difference. Between Progressivism and Democratic Socialism today, at least how they are both practiced. But President Clinton’s liberal agenda was based on yes individual liberty. He didn’t want to empower the Federal Government to take that away from Americans, but he also wanted to empower people who didn’t have the freedom to live their own lives and be self-sufficient, because they lacked the skills to do so.

President Clinton liberal agenda was based on, individual liberty and responsibility. That if you work hard and play by the rules and are productive, you should be rewarded for that and not have government on your back. This is what liberalism its different from progressivism that is more government oriented. Or democratic socialism that is almost completely government oriented. It’s about empowerment, individual Liberty and responsibility. That free adults should have the liberty to live their own lives. But then have to deal with the consequences of their decisions. Good and bad and its also about equality of opportunity.

Not equality of result, that for people who don’t have the skills to be successful and self- sufficient in life, that they are empowered to do so. Which makes society as a whole better off to have more well-trained workers, with the ability to take care of themselves. And more well-trained workers in the workforce, having good jobs and being productive. Paying their fair share of taxes, but not paying taxes that are so high, that it discourages people from being productive.

Bill Clinton put liberalism back on the map in the United States as a positive force for change and made it a mainstream political philosophy, because he was able to put aside the false negative stereotypes that had been suffocating liberalism the previous twenty-five years. And was able to show Americans, that it wasn’t about government doing everything or nothing. But that government should be limited to what it does well and what’s constitutional.