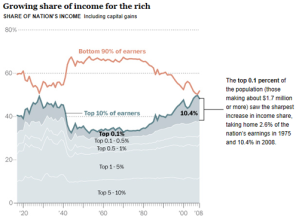 The whole so-called income inequality debate again a term I do not believe in. Has two solutions to what I call the income gap rather than income inequality and the. Income gap has to do with education gap because people who are successful in America tend to be. Very well-educated unless they are entertainers or athletes but even those people tend to be educated as well. And at least attended college and have a college degree even if they quit school to play pro sports or be an entertainer. And went back and finished their education, whereas people at the bottom of the income scale. In a lot of cases didn’t even finish high school and never had an opportunity to either attend college. Because they lacked resources or again didn’t even finish high school or a combination of both.

So the two solutions from the Left in how to deal with the income gap in America. The income gap being the amount of money that high Enders make compared with low Enders. The two solutions are one having to do with what’s called income redistribution. You have this wealthy population who have so much money they’ll never have the time to. Spend it let alone need all of it so let’s pass some type of excise tax on them. And give that money to government to take care of everyone else especially people in poverty. That’s the more let’s say Socialist solution on the left but the Liberal solution on the Left has to do with increasing opportunity. You have this large population of people who aren’t doing very well so let’s empower them so they can have the same freedom to live. Well and be able to take care of themselves with things like education and job-training. While at the same time we still encourage people to do well and even become rich. If their skills and productivity allow for that.

That’s the economic divide in the Democratic Party and on the Left right now. Equality of opportunity, economic opportunity and economic freedom. Vs equality of outcomes that we should all be equal and that no one should be rich or poor and that it’s governments. Job to make sure that no one has too much or too little through income distribution. In the sense government will take from the haves to feed the have-nots. But the way to close the income gap is simply by encouraging people to do well rather than telling them that. There’s a heavy price for doing well that you are going to have to pay the government. And if anything dis incentivize people to do well with high taxes and encourage people not to do well. By saying that if you are economically successful in life, government will take from the rich to take care of you. And while you encourage people to do well, you also empower people who lack the skills to do well and live in freedom.

There is no secret why the average doctor or lawyer in private practice makes around 150-200 thousand dollars a year. And the average  fast-food employee makes around 7-8 bucks and hour. It simply has to do with education, the doctors and lawyers are well-educated. Fast-food workers tend not to be so if you want to close that income gap, then you have to close the education gap as well and have a better educated workforce. Especially at the bottom of the income scale.