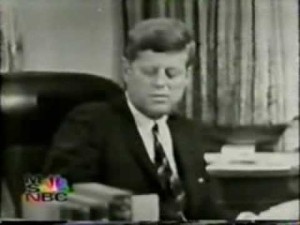 “Outtakes with President John F. Kennedy during an NBC-TV interview on September 9, 1963, two months before JFK’s assassination. Chet Huntley and David Brinkley of NBC News conducted the interview from the Oval Office in the White House.”

President Kennedy, getting a rare opportunity at a retake of an interview that he had before. David Brinkley and Chet Huntley, interviewing President Kennedy about Vietnam which of course in 1963 was going through a civil war between Communists in the North and Democrats in the South.

The Eisenhower Administration decided to back the Democratic North in Vietnam in a limited way through aid and other resources that the Kennedy Administration decided to continue when they came into office in 1961. Almost three years later in late 1963 President Kennedy was in a position where he needed to decide how much should America help the Democratic South after they sent advisers into Vietnam to assist the South. But I think it was clear that he wasn’t in favor of sending American troops in to fight the Vietnam Civil War.

The second question being about the Kennedy tax cuts of 1963 that President Lyndon Johnson finally got through a Democratic Congress in 1963 after the assassination of President Kennedy in November of 63.

What President Kennedy wanted to do was put through an across the board tax cut and pay for it by cutting loopholes to drive consumer spending and economic growth. There were concerns in Congress about how a tax cut that size would affect the deficit. And that is what the President was dealing with then.

Jack Kennedy, was a true Liberal Democrat, because he believed that liberty was worth defending here at home. That America had to be strong at home first economically before we try to show strength abroad. And the we way we should try to show strength abroad was not to try to police the world by ourselves, but work with our allies to preserve peace and expand freedom to people who were looking for it, but didn’t have it because they were being held down by an authoritarian dictatorial regime. Where they have very little if any say on what goes on in their own country.

These were the reasons that the President wanted to help Democratic Vietnam, get the Senate to pass the Test Ban Treaty and to pass a large tax cut. Because he wanted to defend freedom at home and abroad and strengthen the American economy so more Americans could live in freedom.