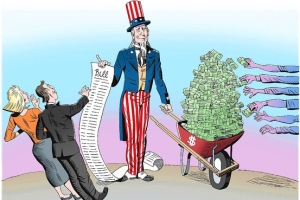 I’m thinking that Eric Schnurer wrote his US News column here with at least a touch of sarcasm. “Let the Republicans get their way and pass laws saying that the rich don’t have to pay anything and give them all the power that they want. And then the rest of the country will wake up and figure out how dangerous this and demand to have their country back and be put in charge. That democracy will prevail and rule again and take down the Corporate State.” At least that is the point that I get from him and what I believe he is saying here.

Look, for anyone who labels them self a Progressive and perhaps because they don’t want to admit to their more socialist leanings and believe that allowing people to have a lot of money is a dangerous thing, even if they earned all of that money and just don’t want to tax them more for public investments, but somehow see wealth as a bad thing in America, I have a good suggestion for you. Tax everybody, except people who truly can’t afford to be taxed at all, people who work in poverty. But tax people based on what they take from society and not what they earn.

What Senator Ben Cardin who serves on the Senate Finance Committee and just happens to be one of my U.S. Senator’s calls a Progressive Consumption Tax and I call it that myself, would solve a lot of our tax problems in America. The poor, would still get their Earned Income Tax Credit and would only have to report their income to get it. Everyone else that is out of poverty earning an income would be taxed based on what they spend. And it would be progressive, because taxes on the basic necessities of life would be taxed fairly low. Luxury items including ball games and other forms of entertainment, would be taxed higher. The more expensive the purchase, the higher it would be taxed. And the rich would end up being taxed more, because they spend more.

Full-time blogger on a multiple ray of topics and subjects, because of multiple interests.
View all posts by Erik Schneider →
This entry was posted in Fiscal Responsibility and tagged Eric Schnurer, Progressive Consumption Tax, Tax Policy, Tax Reform, Tax The Rich, Taxes, The One Percent, The Rich, The Wealthy, Unsoak The Rich. Bookmark the permalink.