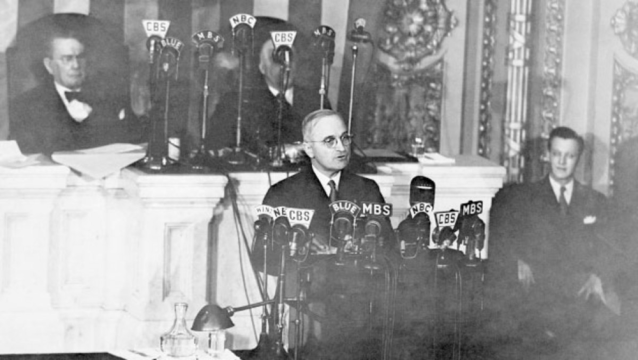 “On April 16, 1945, Harry Truman makes his first official appearance before Congress as president of the United States, after being sworn in following the death of President Franklin D. Roosevelt four days earlier. In his speech, Truman pledges to bring World War II to a victorious end.” 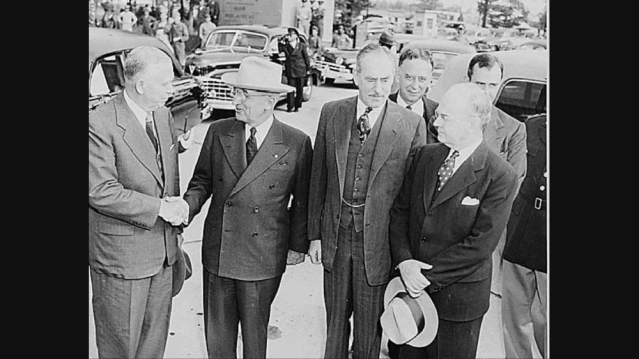 From the James Miller Center

Imagine living on a desert island all by yourself or locked up in solitary confinement for months and then suddenly being released one day and being told you have to run a very large organization. Like I don’t know, wait I got it: the Executive Branch of the United States.

So when our brand new President of the United States Harry Truman, goes up to Congress for the second time since leaving the Senate to speak to his former colleagues there, I don’t think anyone there knew what to expect from him and what President Truman might say.

Both Democrats and Republicans in Congress, probably knew Harry Truman fairly well. at least in the Senate. But Truman at least before becoming President wasn’t a very highly respected man. He was basically seen as a small town hick from Missouri. Who had never seen a big city before he came to Washington in the 1930s.

Harry Truman was always a very under appreciated and underrated man who thrived on that, because even though he was never someone who commanded high confidence, was very intelligent and had good judgment and tended to make the right decisions.

So when President Harry Truman speaks to Congress for the first time as President in 1945, he was speaking 535 men for the most part in Congress and millions of Americans, who in Congress’s case didn’t know what to expect from him. And in America’s case was hearing from their band new leader who they never even heard of.

President Truman was also replacing perhaps the most popular president in American history in Franklin Roosevelt during a time when America was still at war, when the economy was still trying to recover from the Great Recession.

President Truman was a man who until he was fifty-years old, never had a job with much responsibility since leaving the Army after World War I. The U.S. Senate was his first major job where he had any real power and responsibility on his own. And he was 50 when he became a Senator. So this all made for a very interesting presidential address.