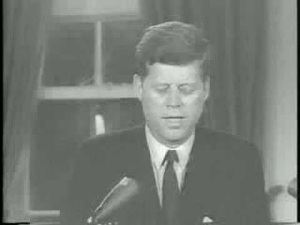 “John F. Kennedy speaks on his income tax cut that he wants to present to Congress in January next year (partial newsreel).”

At risk of sounding partisan: Neoconservative supply siders like to use President John F. Kennedy as their inspiration when talking about President Ronald Reagan’s tax cuts from 1981 and saying that President Kennedy also not only believed in tax cuts, but that tax cuts pay for themselves, even when you are also dramatically increasing government spending, which is what President Reagan and that Congress of 1981-82 did. But President Kennedy didn’t believe that.

When JFK became President in 1961, the top tax rate in America was 90%. The bottom rate was 25% and he inherited and economy that was barely growing in his first two years as President, that was just coming out of the recession from the late 1950s. Whatever your political affiliation is I believe most Americans can agree that 91% is too high for a  top rate (regardless of your income) and that 25% is too high, especially for lower middle income Americans, who perhaps barely make enough money for pay any Federal income taxes.

When Ronald Reagan becomes President in 1981, the top tax rate thanks to President Lyndon Johnson getting tax reform passed out of Congress in 1964, was 70% and the bottom rate was 22%.

President Reagan got through a divided Congress a tax cut that lowered the top rate from 70 to 39 and the bottom rate from 22 to 15. While at the same time doubling the size of the Defense Department and increasing the rest of the Federal budget as well. So there’s no mystery to why four years later we had a budget deficit that goes from 60 billion, to 200 billion dollars under President Ronald Reagan, who talked like a fiscal conservative, but governed like a supply side borrow and spender.

What President Kennedy wanted to do and what President Johnson got passed in 1964, was yes, cut taxes across the board because they were too damn high across the board. While at the same time eliminating tax loopholes in the tax system and making sure the U.S. Government paid for its spending, instead of believing that tax cuts automatically pay for themselves.

If your definition of a fiscal conservative is someone who believes in spending less and not running high deficits and debt, Jack Kennedy was more fiscally conservative than Ron Reagan.