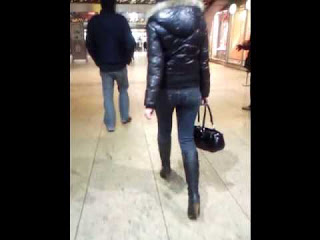 “Woman in Stiletto High Heel Boots.” Originally from Gral Hueter. The video has since been deleted or blocked on YouTube.

When I’m walking down the street somewhere or sitting down in public and see an attractive well built woman walk by, or she’s ahead of me by ten feet or so, and she’s wearing tight jeans in or over boots, like cowgirl or work boots, of course I take a look. Unless I’m in such a hurry that I don’t have the time.

It’s hard for a guy not to stare at a women dressed like that. Sexy women love jeans, because they look good in them and they feel good in them and it makes them feel good and comfortable and perhaps even like being checked out in them. And let the world no that they’re put together and have great style as well. Women don’t wear skinny jeans (denim or leather) because they’re trying to hide and don’t like being seen in public. The opposite is true whether it’s popular celebrities like Sofia Vergara, Mariah Carey, Janet Jackson, (to use as examples) or beautiful sexy women in your neighborhood and hometown.

I just love the sound that the boots make on the ground. It’s like listening to Frank Sinatra sing or Jimmy Hendrix play guitar. It’s poetry in motion to me. Men should thank attractive well-built women who dress like that. These women look great and are not afraid to show the world that they look great. They’re wearing what I believe to be the sexiest combination in women’s fashion right now tight denim with boots.

Of course guys are going to notice women dressed like that. We would have to be blind not to. And tight denim meaning skinny jeans have become so mainstream now thanks to the designer jeans revolution of the late 1970s and then the next one of the late 1990s and early 2000s, that women feel they can wear skinny jeans especially dark wash denim practically everywhere. Perhaps short of to their weddings or church. But women now wear dark wash jeans and boots to the office and dress them up. And not just on Casual Friday.

I’ve said before that I’m not interested in what I call the hooker look, the boots over knees look. Women dressed like that look to me as if they think that they need their sex appeal to make a living. When it comes to tight jeans with boots, I’m interested in women who wear modern jeans cut to show off their rear, but not to the point of showing their rear cleavage when they bend over or stand up. Women dressed like this look sexy to me, but also look like they use their intelligence in their profession.

I like sexy and intelligent women, women who are proud of their appearance, dress to display it in accordance within modern social norms, and stay away from the boundary of the hooker look. Sexy with style is I guess the way I would describe what I at least believe is the modern sexy look. Women who know they look great ad have great legs and want that to be clear in public. But do it in a professional stylish mature way. Low-rise tight jeans, but not to the point that the woman’s cleavage comes out when she stands up or sits down. But shows that she has great legs and a great butt.