Source:The New Yorker– Vote for Centrists, if you too believe in nothing

“The nation is divided. Loved ones tweeting at loved ones. What the American people need now more than ever is a party that can unite the entire country in disappointment. That’s where we step in: the Centrist Party. In 2020, we want you to skip the red and the blue and vote for the grayish taupe that represents our ideologically meek coalition. We couldn’t decide on a campaign slogan—every time we voted on one, everyone abstained—so we’ll let you read the list and, if any resonate, awesome; if not, no big deal!

“Some ideas. Some beliefs. Some feelings.”

“Thinking exactly what you think since [day you were born].”

“Putting the awkward silences back in Thanksgiving.”

“Like our symbol, the petrified deer, we’re proudly frozen in the middle of the road.”

“The sanest, most reasonable waste of a vote.”

Read more of Steven Markow’s piece at The New Yorker 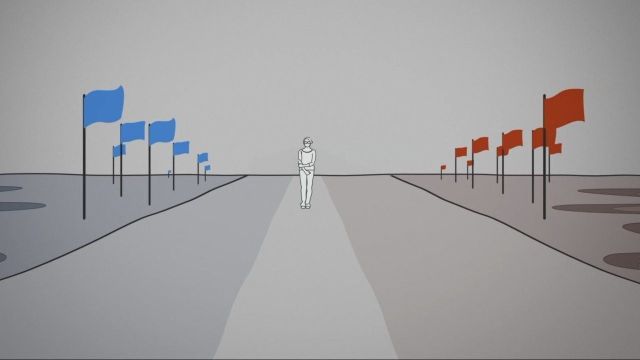 Source:Newsy: ‘What does a moderate voter look like?’– Is Moderate, another label for Nihilist?

“Moderate voters tend to see both parties as extreme, and they mainly want compromise.”

Just like you shouldn’t assume that because it was warm and sunny today, that it will automatically be warm and sunny tomorrow. That you sort of want to know that in advance, before you decide to head to the beach and get caught in a tropical storm on the way there and wonder where did all of that rain come from. You also shouldn’t assume that just because someone is not a Democrat or Republican, or is an Independent, that they’re automatically Centrists.

Me personally, I really don’t believe there is anymore any thing such thing as a Centrist: roughly 60-70% of the country believes in both economic and personal freedom. And according the the geniuses at the mainstream media, those people would be called Centrists, because they’re not particularly right or left and certainly not Far-Right or Far-Left. But if that were the case, Libertarians would be Centrists.

Think about this for a second: Libertarians, who believe that every single government regulation and safety net program, as well as civil rights law, that was created in the 20th Century should be eliminated, who believe that America should drop out of every foreign organization that America is a member of, who believe the Federal income tax should be repealed, and that every narcotic drug that is currently illegal, should be legalized at the Federal level, would be the New-Centrists in American politics. At least according to this mainstream media line of thinking. But anyone with a brain who also happens to use it and is also familiar with American politics, ( which would make you a member of a very small and exclusive club ) knows that can’t be true.

I don’t think we have Centrists, because if you poll on the issues and who American voters tend to vote for and against and who they poll based on what politicians propose and are against, we tend to have a pretty good idea. Americans tend to like their personal and economic freedom, their individualism, their independence from government at least, but they also tend to want a regulatory state for predators, as well as law enforcement to protect us from predators. A safety net for people who truly need it. A military strong enough to defend the country. Civil rights laws, so people aren’t denied access in America, simply because of their race, ethnicity, gender, religion, disability, or sexuality.

And again to my point about Libertarians, if the definition of a Centrist was someone who was conservative on economic and fiscal policy, but liberal on social issues, who believed in both personal and economic freedom, Libertarians would be the Centrists in America. But who seriously believes that Libertarians are Centrists?

If you’re definition of a Centrist is someone who is right down the middle on the political spectrum and perhaps a member of the Mushy-Middle Voters of America, who only takes a stand on any issue when there’s a consensus to do so, whose motto: “I’m willing to compromise on anything, because I believe in nothing: a vote for me is a vote for nothing.” If that’s your idea of a Centrist, someone who is basically a Nihilist, then those voters might actually exist in American politics.

Just look at Millennial’s who only vote for people that they believe are cool and will support anything that person says, just as long as it’s cool and they sound cool. Just look at Beto O’Rourke’s base. ( Or what’s left of it at this point ) A man who proved at last Wednesday’s Democratic debate, that he can not answer questions in multiple languages. Actually, that also happens to be the only thing that Beto accomplished last Wednesday: he’s wishy-washy in two languages.

If you’re idea of a Centrist is someone who spilts the difference on the every key issue if not all issues all together, then I would hate to have that person planning my wedding or any other party. Because you would have food, outfits, decorations that are simply out of place.

I would also hate to have those people in charge of writing the U.S. Constitution some 240 years ago. What would our First Amendment look like if Centrists wrote it: Americans are free to say and believe whatever they want, just as long as at least 50% of the country agrees with it? We can have Freedom of Religion, just as long as at least 50% of the country agrees to be a member of the same religion or no religion at all. We would have the Right to Privacy, but only on the second floor of our homes. We would have an Equal Protection Clause, but for only half of the country. The campaign symbol for a Centrist Party, would be the dear in the headlights in the middle of the road, because Centrists have a 100% dedication to neutrality and compromise. The life of the Centrist if there is such a thing, must be really hard. I mean just making decisions about what to do order at a restaurant must be painful.