EuroNews: Jose Manuel Barroso- Calls For a Federation of States: What a Federal Union of Europe Could Look Like 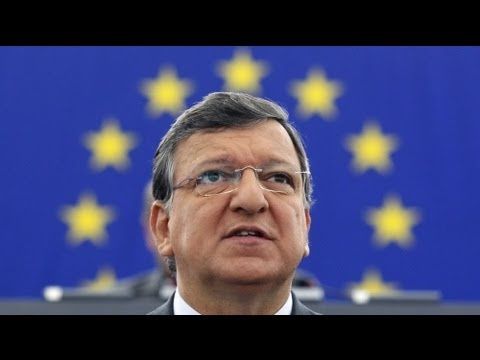 “Europe must become a ‘federation of nation-states,’ the EU Commission’s chief Jose Manuel Barroso has said.

The call for deeper European integration came in Strasbourg during the President’s State of the Union speech to MEPs.

“The present European Union must evolve. And let’s not be afraid of the word: we will need to move towards a federation of nation states. This is what we need. Not a superstate. A democratic federation of nation states that can tackle our common problems through to the sharing of sovereignty in a way that each country and each citizen are better equipped to control their destiny,” Barosso said.

While, Barroso stressed he was not calling for a European ‘superstate’ to tackle Europe’s economic problems, Liberal group leader Guy Verhofstadt said.

”The euro crisis is calling for the creation of a true federal state, a European state, a state that has a European treasury, a European bond market, European government. All this is necessary. Obviously, this takes over from nation states. It is a transfer of skills and powers from a national to a European level.”

Other pro-Europeans also greeted Barroso’s vision with enthusiasm but insisted more needed to be done to lessen Europe’s social problems.

“What Mr Barroso did today is present a toolbox to help Europe to deal with the crisis. Most of them are in the right direction. We would prefer, as a group, more emphasis on the need to reinvent social Europe,” Greek MEP Maria Elena Koppa said.

Before I layout what a Federal Union of Europe which I’m guessing this new European superstate would like and what they would need to do, first I’ll tell you what I believe the borders of the country would look like. It wouldn’t be the entire European/Eurasian continent going from let’s say Belgium all the way over to the Caucus States and Turkey and Middle East.

The United Kingdom would probably never want to be part of a Federal Europe, because of its history and the fact they are a monarchy and do very well as a power by themselves. You would probably be talking about a country going from Belgium in the Northwest with Brussels being the capital of this new Federalist Republic and I say Federalist for a reason which I’ll get into later.

It would range from Belgium in the Northwest to Poland in the Northeast. To Portugal in the Southwest to Italy in the Southeast with the former Soviet Union Slavic states in Eurasia out of this new country, as well as the former Yugoslavia. As well as Scandinavia which physically is about the size of continental Western Europe anyway. Out of this Federalist Republic as well.

So we would be talking about a huge new country physically about half the size of the continental United States. But somewhere in the neighborhood of 30-50 million more people who would be either the new largest economy in the world or right there with the United States. That would also be military and diplomatic, as well as political power because this new country would replace NATO with a President and executive branch now controlling this military.

This new Europe could compete with anyone in the world economically and everything else that would be a leader in some of these areas as well. That would also be a democracy again if this was done right and set up successfully which is just as important as the idea of a Federalist Republic of Europe getting it right. Similar to how the United States of America was set up in the late 1700s.

So how would a Federalist Union of Europe look like: somewhere between 27-30 states. Federal capital in Brussels and probably similar to the United States that it would have checks and balances, separation of branches simply because of the fact that each state in the union use to be an independent country so they would want their own autonomy over their domestic affairs, but also so the big states in the union like Germany, France and Italy to use as examples do not control most of the political power in Brussels.

So you would have an executive branch like the commission which is called administration in America. With a President at the head with several different cabinet level ministries. But with a legislative branch that would probably be Bicameral Assembly or Congress, or Parliament so the smaller states as well as the people are well represented as well. You would have some type of Federal assembly. With a lower House and an upper house called the Senate or council. The lower House would represent Federal House districts and the Senate would represent the states.

This new assembly similar to how Congress works in America would be able to write and pass their own legislation. In other words, write laws with the President getting veto and signing power over them. And the assembly would have to pass the same laws before it would go to the president. The House and Senate would have to conference and pass the same law before it is sent to the President. The President as head of the commission would get to send legislation to the assembly as well as veto or sign assembly legislation.

You would then need a Federal judicial branch that would judge the constitutionality of laws that are passed at all levels. As well as handle civil disputes including a high court. As well as criminal cases that the commission prosecutes which again is similar to how America and a lot of other Western democracies function. The difference being the Europe would be more Federalist with more power going to the states over their own affairs. So Europe probably wouldn’t be a social democracy with so much power centralized with the central government. Because states rights because of the fact these states use to be countries would be highly respected.

Because of all the cultural, ethnic, and national tensions like with creating a national language, Europe would have to be Federalist with the states having autonomy over their domestic affairs. With a lot of power going to the governors and state legislatures. So these states feel well represented in Europe and feel that this new powerful country is home for them and being able to live in their native state and speak their native language. But having a Federal language which would probably be English so the Federal Government could do its business, but also so Europeans of different ethnic backgrounds could communicate with each other.

1 Response to EuroNews: Jose Manuel Barroso- Calls For a Federation of States: What a Federal Union of Europe Could Look Like