What’s going on in the Democratic Party today reminds me of what was going on post-JFK assassination in the 1960s and into the 1970s. Even though I wasn’t born until 1975, of course I don’t remember seeing this, but I read pretty well and watch a lot of documentaries. With John F. Kennedy in the White House the Democratic Left was essentially made up of Center-Left Progressives and Liberals. Democratic Socialists back then were still in the closet politically. Communists, were either in hiding or looking to escape both physically and politically to Cuba or Russia.

Back in the early 1960s you had the FDR/LBJ Progressive Democratic Coalition. And the JFK Liberal Democrats who believed in freedom and even capitalism, but that it should benefit everyone and not just people born to wealth and European-Americans. JFK Democrats would be what are called New Democrats today. The Center-Left Progressives and Liberals, tended too agree on foreign policy and national security issues, both were strong internationalists, anti-Communists, strong defense, effective law enforcement, fiscal responsibility, free trade, civil rights, equal rights, but tended to differ on the role of the Federal Government and what it should do for the people and how much it should tax.

It was Franklin Roosevelt and Harry Truman, (Progressive Democrats) that made America the economic and military power that it is today. Not all by themselves obviously, but moved us into the direction during World War II and after that. Liberal Democrat John F. Kennedy was an internationalist hawk on foreign policy and national security and probably hated communism as much as Ronald Reagan. But he also believed in civil rights and pushed for those things, as well as civil liberties, freedom of choice, right to privacy, didn’t believe Americans should be highly taxed.

The assassination of President John F. Kennedy and President Lyndon Johnson pretty much all by himself, along with the JFK assassination, pretty much destroyed the old Democratic Party. The civil rights laws and the Great Society, moved the right-wing Dixiecrats (who would be called Nationalists today) out of the Democratic Party and into the Republican Party. Thanks to the Baby Boom coming of age in the the 1960s and the Vietnam War, Socialists in America (both Democratic and Communist) came out of the closet. Perhaps moving back from Cuba and Russia and into the Democratic Party.

Democrats started losing the South but started dominating the West Coast and Northeast with all of these new Socialists into the party. Who didn’t think communism was a bad thing, who didn’t like capitalism, who thought America was the real Evil Empire and I could go on, but I’ll spare you. The New-Left in the Democratic Party came of age post-JFK assassination and into the LBJ Administration.

What we’re seeing now in the Democratic Party is the Democratic Socialist (not Communist) wing of the New-Left, that is led by Senator Bernie Sanders (Socialist Republic of Vermont) and the Nancy Pelosi Progressive Democratic wing of the Democratic Party led by House Minority Leader Nancy Pelosi. Who comes from the New-Left socialist wing from the 1960s in San Francisco, but has moderated her radical views from the time before she was Democratic Leader, because she now represents and much broader party and caucus. My JFK Liberal Democratic wing is not as big or at least as vocal. Perhaps Senator Cory Booker and former Governor Martin O’Malley, now represent the Liberal Democrats in the party.

If the Democratic Party wants to win back the House and have even a shot at winning back the Senate in 2018, both the Center-Left Liberals and Progressives and Far-Left Socialists, are going to have to come together and work together, stop attacking each other because they believe one side is too centrist or radical. Come together on a agenda that brings new Democrats into the party and votes Democratic. And let the presidential primary season decide how far left the Democratic Party goes into the future, or do we remain a Center-Left party that we’ve been at least since the 1990s. Otherwise the party will break up and you won’t see a large Democratic Party that can compete against the GOP in the future. 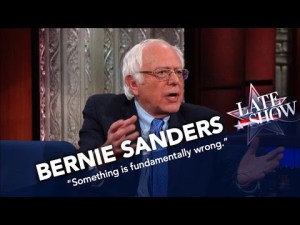 Source: The Late Show Bernie Sanders: The Democrats Must Become a Grassroots Party