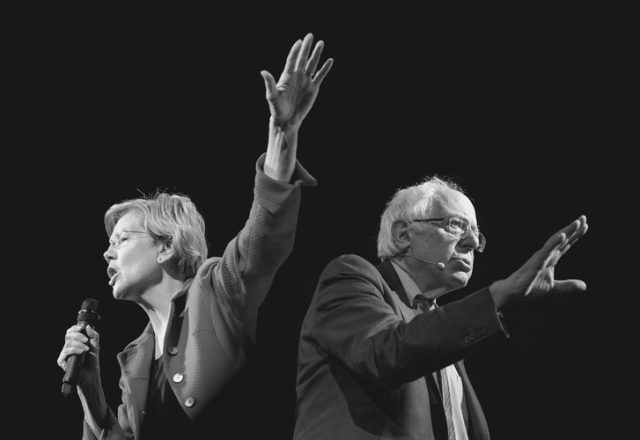 Source:The New Yorker– The battle for the Left-Wing in the Democratic Party.

“This past week was perhaps one of the most important weeks in one of the most important election seasons in the history of the Democratic Party. Elizabeth Warren is on the rise. Coverage of her array of policy proposals and hard campaigning has put her in second place over Bernie Sanders in at least one national poll and a few state polls. Sanders, meanwhile, delivered a major address this past Wednesday defining “democratic socialism,” a self-applied label that sets him apart from Warren, who has called herself “capitalist to my bones.” Each putatively offers a different tack for the Party’s reinvigorated progressive wing to take against the current front-runner, Joe Biden, and President Trump in the general election.

But since Sanders entered the race many commentators have expressed the view that the substantive differences between Warren and Sanders don’t extend very far. “Why would Democratic voters choose Sanders when Warren is running?” the writer Moira Donegan asked in the Guardian earlier this year. “The two are not ideologically identical, but the differences between their major policy stances, on regulation of financial services and the need to extend the welfare state, are relatively minor, especially compared to the rest of the field.”

This is mostly true, particularly on domestic policy. A Sanders Administration may well pursue many of the proposals Elizabeth Warren has put out, from a progressive wealth tax to large new investments in affordable housing. Warren has backed Sanders’s criticisms of Amazon’s labor practices, and both candidates support the Green New Deal. There is a key difference, however, on one of the race’s key issues: Warren is a co-sponsor of Sanders’s Medicare for All bill but has yet to state whether she supports its call to eliminate private health insurance, a provision that other candidates who nominally support the Sanders plan have waffled on or rejected.” 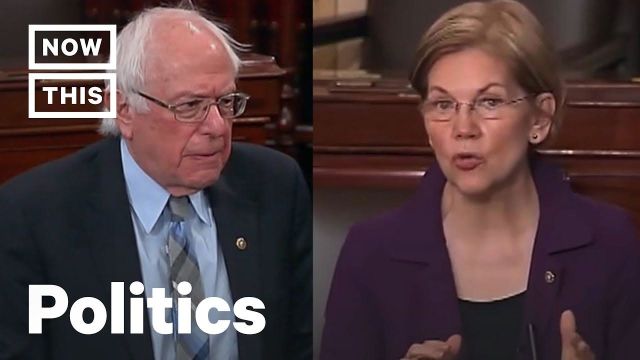 Source:Now This News: ‘How Bernie Sanders and Elizabeth Warren Plan to Raise Trillions in Tax Revenue’– Bernie vs. Liz

Bernie dropped the ‘For the 99.8% Act.’ It goes after the 0.2% of Americans who inherit more than $3.5 million by taxing their estates at 77%. This comes after 3 GOP Senators introduced plans to abolish the estate tax, which they deem the ‘death tax.’

Bernie’s tax plan could raise $2.2 trillion from just 588 billionaires over time. And raise $315 billion in the next decade. Bernie’s tax plan isn’t new — a GOP President once championed the idea. One thing’s for sure: Wall Street is terrified by both Bernie AND Warren’s plans.”

When you’re talking about Bernie vs. Liz, ( Or Bernie Sanders vs. Elizabeth Warren ) you’re talking about two people who basically believe in the same things. If anything, Liz is to the Left of Bernie on wha the Far-Left calls identity politics and Bernie isn’t interested in making race, ethnicity, or gender political issues and just wants to see that people aren’t denied access in America simply because of their DNA and biological characteristics. And Bernie, is to the Left of Liz perhaps when it comes to rhetoric about American corporations and believes that private health insurers should be outlawed, where, Liz just wants Medicare to be available for everyone, but not mandated on everyone.

But Bernie and Liz, both believe that the American private enterprise system should still be intact and not nationalized by the U.S. Government: neither one of them are Marxists, but they’re both Democratic Socialists ( or Social Democrats, if you prefer ) who believe in the American private enterprise system, but that it should be highly taxed and regulated to fund a large and generous American welfare state. That worker benefits should be supplied by the Federal Government, not by private employers.

This idea that the main difference between Bernie and Liz, is that Bernie is a proud and self-described Democratic Socialist and that Liz calls herself a capitalist, doesn’t not just fly, but it doesn’t get off the ground: sort of like an airplane stuck in Phoenix, Arizona in July because it’s too hot and the plane overheats. ( Something that I’ve experienced personally ) Or a plane in Minneapolis, Minnesota in January, because there’s too much snow on the ground.

For one, capitalism is not a political ideology, but an economic system: when Senator Warren called herself a capitalist instead of a Socialist, she answered that as if she was saying that she was a capitalist and not a Marxist: that she believed in the private enterprise system and not state-ownership of the entire economy and society. But that was not the question; she was asked that because the reporter was asking about her political philosophy, not whether she believed in capitalism or not.

The only major differences other than a public option for Medicare, which is was Elizabeth Warren believes in, versus Medicare For All with no private options being available, which is what Bernie Sanders believes in and identity politics which is what Liz believes in and supports and Bernie doesn’t, is how they self-describe their politics. Bernie, is an out-of-the-closet Eugene Debs-Henry Wallace- Norman Thomas- David McReynolds- George McGovern Democratic Socialist and proud of all of that. Liz, is a stuck in the closet Democratic Socialist. ( Or Social Democrat, if you prefer )

Bernie and Liz, both support American private enterprise and American capitalism. But both believe in a highly regulated private economy, with a large welfare state to provide Americans workers with all the benefits that they need, instead of their employers. And they both believe in high taxation across the board and on private employers to fund that welfare state. This is not Goldwater vs. Rockefeller, but more like Henry Wallace vs. Norman Thomas.