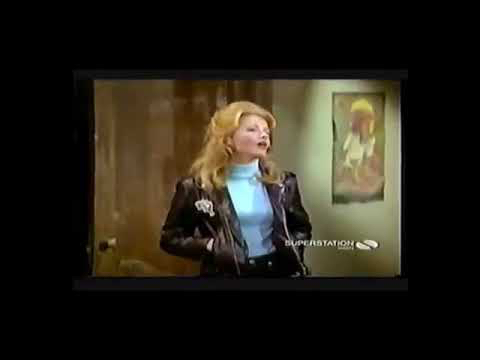 I was never a fan of the show Happy Days and I always thought it was pretty cheesy, except for Fonzi ( played by Henry Winkler ) and maybe that’s because the show takes place in 1950s Midwest America before America looked like America does today with all the ethnic and racial diversity. Even though the show and series was made and shown in the 1970s when America did look and sound much different, than it did even 10, 15, 20 years ago. Or perhaps it just had a lot of cheesy writing. But I do like the She Devils episode and for multiple reasons. 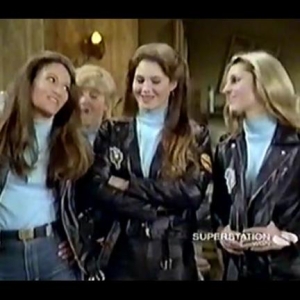 This is a very funny episode and for multiple reasons. You got guys who are playing nerds here who other than maybe the dark hair guy, all look like they would struggle to benchpress their own pillow, who are getting pushed around ( to put it mildly ) by a female outlaw biker gang. Who are very tough and look like perhaps they could’ve played professional football ( and not just their leader ) and yet they’re all beautiful, very cute even, and also very sexy. With Richie ( played by Ron Howard ) the leader of the nerds ) trying to act tough and stand up against a bunch a women. Imagine that, American men feeling physically threatened by women and they’re all straight.

Source: The Saleroom– She Devils

This show is not about a dykish group of lesbian outlaw bikers, who hate men and see the guys as easy targets and go after them. They’re does seem to be a radical feminist vibe to this show, but it’s about a straight female outlaw biker gang, picking on guys who look like chess club geeks and get paid to do the high school or college football team’s homework every night. Computer geeks who look like they go to the library for actual fun and not just research. Which is what most Americans use libraries for or to check out a book that they’re not sure about buying. 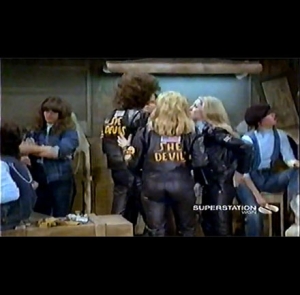 So you have a very funny episode here with a feminist outlaw biker gang, who feel the need to get back at these guys who they see as nerds, because one of them ( played by Scott Bao, before he became a Donald Trump loyalist ) somehow wronged one of the members of the gang. Perhaps you could say screwed, but that can be interpreted in multiple ways here, but they believe he hurt their gang member in someway. And see these nerds with Chachi ( played by Scott Bao ) who is with them, as their opportunity to get back at Chachi.

And you also have a female outlaw biker gang with the characteristics that I’ve already mentioned, who are also very attractive and very sexy. Sort of reminds me of those outlaw biker movies from the late 1960s and early 1970s, that all had at least one attractive sexy woman in and generally multiple very attractive women in like the Glory Stompers from 1967 or go up to the 1980s with Easy Wheels from 1989. But this show was an episode from a TV series and not a movie. And yet the footage is just as good, if not better and the comes out in 1979 where you weren’t seeing many if any female outlaw gangs on TV at least, or anywhere else. This is a very good show.