Posted on December 4, 2017 by Erik Schneider

The Religious-Right (Christian-Right, actually) support for a man like Donald Trump is all the evidence that you need to know that this political movement is nothing more than a fraud. This is a moment that self-proclaim’s itself being about defending conservative Christian values and what they call American values, and yet they back a man who owns casinos, did business with strip clubs, admits to molesting women, has been divorced twice and cheated on his previous two wives, was pro-choice on abortion up until 2011 or so, a New York City Liberal Democrat, up until 2012 or so, even pro-gay marriage and yet they claim is someone who defends their conservative Christian values. Which of those values is he defending? The divorces, abortion, sexual harassment, gay marriage?

The Christian-Right, at least the hardcore partisans in the movement who seem interested nothing but defeating Democrats at any costs, are a political cult. Religious cult might be too nice for them. They are America’s and the West’s version of ISIS. They take a religion in Christianity and the Evangelical wing of it and have completely butcher it. And have fooled millions of Southern Anglo-Protestants in America into thinking that they’re behind him and back their way of life and defend Christianity everyday. When the only thing that they’re doing is backing Republicans who share their fundamentalist theocratic political philosophy.

Jerry Falwell Jr. (the President of Liberty University) support for Donald Trump, is all about politics. It has nothing to do with Christianity and Christian values. Trump wasn’t active at all when it came to religion up until a few years ago and can’t even quote one line from the Bible. Trump is a Republican and a right-wing Nationalist and Falwell and other members of his movement see his as their ticket to getting right-wing judges appointed and confirmed, as well as getting more right-wing Republicans and so-called Christian-Conservatives elected to office. 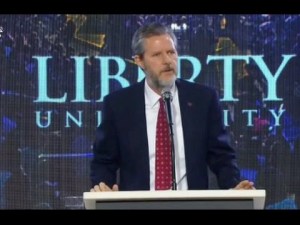