The Onion: John Boehner To Paul Ryan: ‘I Was Once Young And Beautiful Too’ 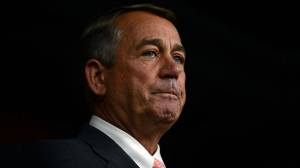 Source: The Onion: John Boehner To Paul Ryan: ‘I Was Once Young And Beautiful Too’

Anyone worried about looking too cute and too young for their age, I got a healthier way to age than to take up tobacco and alcoholism. Try leading a wolf pack of people in government that doesn’t believe in government. Which would be like trying to force some hippie vegetarian to get on a meat lovers diet. Good luck with that with all the frustration will come with it. Sure! New Speaker Paul Ryan at 45, is a young-looking tall handsome Midwestern man who is happily married with kids and has a life outside of the swamp better known as Washington. And right now looks like a man who just won the White House in a landslide. But the German Nazis looked unbeatable until America went to Europe and the British and French got off their pacifist pussy-whipped asses and decided to, “okay! We’ll defend our own country!” And the Nazis actually faced some real competition.

Once Speaker Ryan cuts his first deal with the Senate and perhaps even House Minority Nancy Pelosi, to avoid House Republican led government shutdowns, or with President Obama and agrees to fund the government without the President voluntarily resigning, or impeaching himself, the new young Speaker, will be accused of the worst sinful thing that you can on the Far-Right in America, liberalism! And be accused of working with the Democrats to destroy America. And inviting ISIS in to occupy America. Or completely opening up the Southern border to import millions of Mexicans to take all of our fast food jobs. Or whatever the week long pot high the Far-Right is on and whatever fantasy they’re going through at the time.

Sure! Being Speaker of the House of Representatives, might look like Wisconsin cheeseburgers and freedom fries right now. But wait until Speaker Ryan actually has to do his job and get bills passed that have to be passed for the Federal Government which he is now one of the top leaders of, has to get done for the government, to I don’t know, protect the country from terrorism. You know, little boring details like that. Which he’ll have to get Democratic support for both in the Senate and of course from President Obama. As well as Moderate Republicans both in the House and Senate. Then the new Speaker might wish he was at a Green Bay Packers game and eating a Wisconsin cheeseburger and never want to drink the Tea Party again.