CNN: ‘Marilyn Monroe in The Kennedys’

“CNN’s Erin McPike reports on revelations of Marilyn Monroe and the Kennedys found in a Hollywood investigator’s notes. For more CNN videos, visit our site at:CNN.” 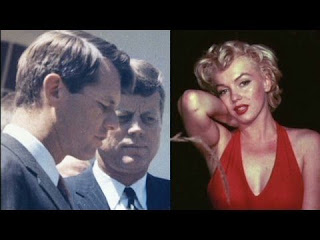 John F. Kennedy, is my number one political hero, but as great as a politician as he was and in many ways a great man, he never becomes President of the United States if the media back then bothered to report on the personal lives of politicians. Only tabloids did that and as most people know tabloids aren’t taken seriously especially when it comes to politicians. At least by intelligent people.

Jack Kennedy, is simply one of the most irresponsible politicians we’ve ever had at least as far as how he lived his personal life. He had personal and even friendly relationships with gangsters and friends of gangsters. And even had an affair as a married man with the girlfriend of a gangster in Judy Campbell. The girlfriend of Italian gangster Sam Giacana.

Marilyn Monroe, is an example of the recklessness of Jack Kennedy. Not that Marilyn was a bad person, because the opposite is true there, but she was a very immature, baby-faced adorable, woman, whose personality and maturity didn’t seem much older. Who was mentally unstable and had Hollywood fantasies that Jack would divorce his wife Jackie and that Marilyn would become next First Lady of the United States.

All Jack wanted from Marilyn was her body, sex, and a good time. Which might sound really rude, if not crude, but he never saw Marilyn as long-term romance material and not marriage material. But to be completely honest: I don’t believe he ever saw any woman as marriage material, at least in the sense he would settle down with her and give up all of his affairs.

Jack, officially broke it off with Marilyn in 1962 and of course didn’t have the decency and wasn’t man enough to personally tell her that himself. And had his brother and most trusted aid Bobby do that for him. But that is as far as it goes with how Marilyn was after she got the news and how they effected her.

There’s no real evidence if any evidence, of anyone being in the house other than Marilyn and her housekeeper the night that she died at home. The most loyal of Marilyn fans will never except that a woman this sexy, beautiful, and adorable, with the great personality, sense of humor, talent and everything else, and entertainer who was headed to Hollywood Hall of Fame has she lived in normal live in years, that she killed herself. Accidentally, or otherwise and that is why these conspiracy theories that someone murdered her exist.