Posted on November 2, 2015 by Erik Schneider 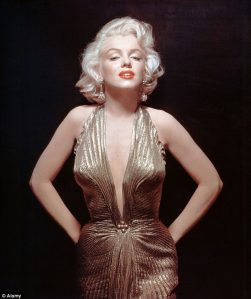 I’ll be the first to admit as a Marilyn Monroe fan of hers both as an entertainer and the physical goddess that she was, that the way she died was really sad and even worst than being murdered. Because the best evidence available back then over fifty years ago and today suggesting if not simply saying that she killed herself. Either accidentally, or even worst by killing herself. And I understand that fans of her having such a hard time accepting that their hero killed herself that way, or even killed herself at all. The same way that John Kennedy fans, can’t accept that a born loser shot and killed him. But the whole point of evidence and facts is to tell us what we know and what we should believe based on the best available facts and evidence. Not to make us feel better, which is very different.

But over fifty years later no one has put any real evidence that Marilyn could have died any other way. They say someone murdered her. Based on what? What evidence is there that someone was there when Marilyn died and killed her? And who is this supposed person? No evidence suggesting that someone was there and who could it possibly be. We know that Marilyn tried to kill herself at least four other times before she died. We know her career wasn’t going very well with her having trouble at work and no showing up and leaving early. We know she was a heavy drug user who suffered from depression, which is why she was under so much medication and had tried to kill herself before. We know about the pill bottles and the alcohol that was by her when she died.

All the evidence suggest that she killed herself one way or other. Again either by accident, or by suicide. She wasn’t happy, she wasn’t living in a very nice place, especially for a women who was as big as a star as she was. A beautiful, hot, summer, Los Angeles night and this hot, sexy baby-faced adorable goddess, with a great voice and personality and she’s all alone. Other than her housekeeper who was asleep down the hall when Marilyn died. She was not a women who was in a healthy state of mind, to say the least. Even if you grant the story that Marilyn had a book and a lot of information that she was going to release about Jack and Bob Kennedy, where’s the evidence that either of them had anything to do with the actual death of Marilyn? No one has been able to put either one of them there yet. Or suggest anything that could say they had a role in planning her death.

As the old cliché goes, “facts are a stubborn thing.” Meaning you can’t argue with them in an intelligent way where an intelligent person who knows better and is in a right state of mind would say, ‘wait! I was wrong all along! Water really is dry and fire is cold!” Or whatever example you want to use. All the best and perhaps only evidence suggests that the only person involved in the death of Marilyn Monroe, is Marilyn herself. Which tells the people close to her, including her housekeeper and she had a lot of other friends, didn’t know her well enough. And saw that she really wasn’t doing well and that was in the need of professional help. What she got instead was people abandoning her. Including the Kennedy’s and her studio and perhaps personal friends. Which is just more evidence of how sad her death really was.
Marilyn Monroe History: History’s Mysteries- The Death of Marilyn Monroe