Larissa is one of the beautiful brunettes over at Leathered Life who models Miss Sixty leather jeans for them. I don’t like her as much as Laura and Lena, but she’s very sexy in black leather. 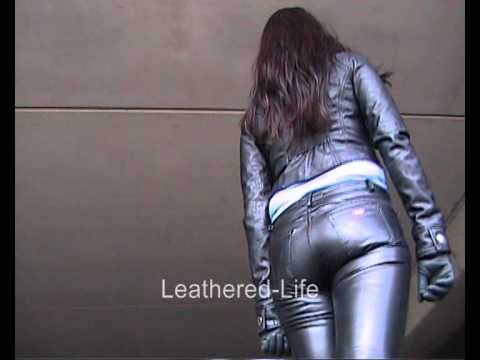 Now here’s a woman whose not ashamed of at least one of her assets. I guess you sort of have to approve of your assets to be a fashion model, especially a leather model who wears skin-tight leather jeans on a regular basis, which is what Larissa does for Leathered Life.

Beautiful sexy woman in a leather jacket, boots and yes Miss Sixty leather jeans. And showing herself off in this outfit.

Videos like this would what the Christian Right and so-called Moral Majority would say are “immoral and should be banned and taken down by government”. Radical feminists would say “these videos are an example of women being abused and forced into pleasing the man and another example of male sexist power”, or something.

The rest of us would say whether we like the video or not, here’s a professional model doing her job and the more people who see her, the better she does and the more power to her. That is where I am not only as a man, but as a Liberal who believes in free choice and expression.