Source:Ginoong Kamote– Moses Malone, when he was with the Houston Rockets, playing the Boston Celtics, perhaps in 1981.

“Moses Malone is an American former National Basketball Association (NBA) basketball player who also played in the American Basketball Association (ABA), as well as on the NBA’s Atlanta Hawks, Houston Rockets, Milwaukee Bucks, Philadelphia 76ers, San Antonio Spurs and Washington Bullets. Malone played 21 seasons in the NBA. Before retiring from basketball, he was the last ABA participant to still be playing in the NBA. In 2001, he was inducted into the Basketball Hall of Fame”

Just from looking at the background of this photo, I would say this game was played at the Atlanta Omni, with the Philadelphia 76ers playing the Atlanta Hawks. But that’s all I know about it. 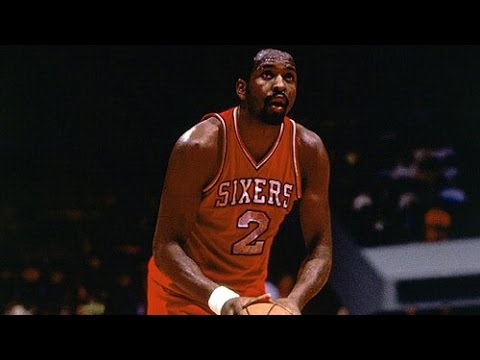 Source:NBA-TV– one of the things that made Moses Malone so effective as an NBA big man, was his ability not just to get to the free throw line, but to make his free throws. He always shot around 75-80% from the foul line, which always made his one of the best free show shooting big men in the NBA. Which put even more pressure on the other teams big men, because not only where they in foul trouble a lot, but they were also giving up a lot of free points to Moses and his team.

Moses Malone was simply a bull with a lot of skills who was almost impossible to box out with his brute strength, quickness and determination. Whose one of the top five centers of all-time because of what he could do in the paint both offensively and defensively. Who also might be the best offensive rebounder of all-time as well. Kareem, Wilt, Bill Russell and maybe Hakeem and that would be the only centers I would take over Moses and I could easily have Moses over Hakeem, but that would be a tossup.

Imagine a man 6’9-6’10 260 pounds or so, of brute strength and muscle, but who was also very quick and athletic. The man was impossible to box out for the most part, I’m not sure Wilt Chamberlain could box out Moses in his prime. The man was simply a bull physically as a man, but with a heart bigger than that. And when he was finally put on a very good team, a great team, one of the best teams of all-time in the NBA, the 1983 Philadelphia 76ers, you really got to see how great he was and how great he could make other players, including other great players.