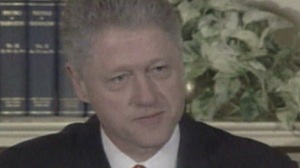 Source:ODN– President Bill Clinton: “I did not have sex with that woman, Miss Lewinsky”

“Bill Clinton’s presidency was rocked by the Monica Lewinsky scandal. We revisit the affair that dogged his terms in office. Monica Lewinsky, the onetime White House intern whose 1990s affair with Bill Clinton nearly brought down his presidency, broke a long silence on Tuesday, saying she regretted what happened. Writing in Vanity Fair magazine, the 40-year-old said she was made a “scapegoat in order to protect his powerful position.” Ms Lewinsky added, “I, myself, deeply regret what happened between me and President Clinton. Let me say it again: I. Myself. Deeply. Regret. What. Happened.” Report by Ashley Fudge.”

The person I blame most for the Monica Lewinsky White House intern scandal and perhaps the only person I blame, is President Bill Clinton for acting as irresponsible as he did, for getting involved romantically at all with an intern. Doesn’t mean I believe he should’ve been impeached for it and definitely not convicted which the Senate didn’t do. Independent Prosecutor Ken Starr and the House Republicans if anything acted more irresponsible than President Clinton. But the fact is this scandal doesn’t happen without Bill Clinton.

And Clinton, gave the meat to the Confederate Republicans (that I now call them, not all Republicans, but the far-right in the party) who’ve been looking to kick Bill Clinton out of office since he became President back in 1993. And if anything were looking to kick Clinton out of the Governorship in Arkansas when he was Governor there in the 1980s. Clinton was a Baby Boom Liberal Democrat from the 1960s, who believed in things like civil rights, equal opportunity, reducing poverty. But who also believed in things like fiscal responsibility. And not someone they could label as a tax and spend Socialist and beat in an election. So the path for them to defeat Bill Clinton was much harder.

Bill Clinton, I believed scared the hell out of the Far-Right in America, because he reminded most of the country of John F. Kennedy. And someone who was part of the New Democratic Liberal coalition in the party. That had moved past the Roosevelt-LBJ Progressive Era. And someone who could communicate to a wide ray of Americans and had moved past the 1950s culturally. And understood that it was no longer the 1950s and that the country was becoming more diverse. Ethnically, racially, culturally, regionally. And Confederate Republicans hadn’t moved past the 1950s yet. And we’re still in that little box and weren’t ready to see Americans that most of the country wasn’t familiar with in the 1950s.

The Far-Right, or New-Right, isn’t ready for a country that was becoming more liberal and libertarian culturally and socially. As well as economically and they saw Bill Clinton as a threat to their way of life and what they saw as Traditional America. And someone who had to be stopped.