The Onion: Minnesota Braces For The Return of Michelle Bachmann: The Week in What Didn’t Happen, This Time Not From Fox News 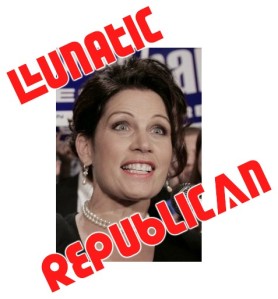 This post was originally posted at FRS Daily Press

The State of Minnesota has had five months to recover from the return of Representative Michele Bachmann, who thank God doesn’t represent the whole state, only 600K or so Minnesotans have to put up with her. And a lot of those people are mental patients, which is Representative Bachmann’s base of support, being that she’s one of them, just on the lam. You would think that she would be easy to track down, seeing that she’s a U.S. Representative who works in Congress. But that’s perhaps a different story.

I thought I would give a status report on the damage that Representative Bachmann has caused. Report what’s she been saying and then report on what’s actually been happening. This week she endorsed Mitt Romney for President and within five minutes of that, Governor Romney’s polls with Independents plummeted and he lost ten points. The Flip Flopper in Chief, managed to bring those numbers back by supporting a constitutional amendment to make same-sex Marriage the law of the land. Which won him support with the homosexual community, something that only Mitt Romney can do. Being that he has a clones of himself.

In other news Representative Bachmann announced that there isn’t a Republican War on Women. Five minutes later she came out for a law that would ban women from the workforce. Her husband Marcus Bachmann also came out of the closet and supports Governor Romney’s constitutional amendment to make same-sex marriage the law of the land as well. He also endorsed Mitt, but endorsed his clone Mitt, the liberal Mitt by accident. So the liberal Mitt picked up points in the homosexual community as well. Which doesn’t do much good for the real Mitt, whoever that person is.

The real Mitt is MIA and there’s an all points bulletin now to try to track down the real Mitt. Officials believe they know what the real Mitt looks like. They’ve seen pictures of him and have talked to Mitt’s other clones. Neoconservative Mitt, Moderate Mitt and Conservative Mitt. But have been unable to track down the real Mitt so far. So the week in what didn’t happen, this time not from Fox News, Fox News is currently on vacation, actually in court. Dealing with libel lawsuits filed against them by Democrats. But announced they’ll be back next week reporting everything that didn’t happen next week. Including a special report from Sean Hannity, on the Democratic War on Memorial Day. Honoring the service of our servicemen and women.