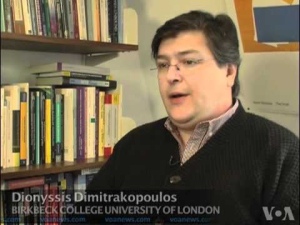 “Voice of America (VOA) is an American international broadcaster. It is the largest[2] and oldest U.S. funded international broadcaster.[3][4] VOA produces digital, TV, and radio content in 47 languages which it distributes to affiliate stations around the globe. It is primarily viewed by foreign audiences, so VOA programming has an influence on public opinion abroad regarding the United States and its people.

VOA is headquartered in Washington, D.C., and overseen by the U.S. Agency for Global Media (USAGM), an independent agency of the U.S. government.[7] Funds are appropriated annually under the budget for embassies and consulates. In 2016, VOA broadcast an estimated 1,800 hours of radio and TV programming each week to approximately 236.6 million people worldwide with about 1,050 employees and a taxpayer-funded annual budget of US$218.5 million.”

“The leader of Greece’s leftist Syriza party is beginning talks with other parties on forming a coalition government to reject what he calls “barbaric” austerity measures imposed by the European Union. Voters failed to give any party a majority in Sunday’s election, plunging Greece into more uncertainty. As Henry Ridgwell reports for VOA, the result is part of a wave of anti-austerity feeling that is building momentum in Europe.”

With Socialists making a comeback in France, Greek Socialists now see an opportunity to throw their wait around in Greece. A country, thats buried in debt, (making the American debt look like peanuts) thats in the process of being bailed out by the International Monetary Fund and the European Union. Which is being led by Germany right now that has a Conservative led government.

If Greece takes strict austerity measures, which is a big if because the Hellenic Republic of Greece, is essentially a Socialist State, where their welfare state is very popular, so making steep cuts in their welfare state, is not very popular. As their current government is finding out and as we’ve seen from the protests there. Greece is now headed for new Parliamentary elections to hopefully for them, to form a new government that can get its economy going again and get its debt and deficit under control.

The main two political parties in Greece, are the Socialist Party of course and the New Republic Party. Which would be like the Conservative Party in Britain. The Socialists obviously being against austerity and the Republicans will try to push it.

If the Greeks don’t want to have to accept the demands of the European Union in resolving its debt and fixing its economy, as condition of receiving a bail out from European taxpayers, then they should fix their own problems. Resolve their  own crisis.

And the Greek people should make a decision: do they want the Socialists, or the Republicans to do this and give them the power to do it. But I don’t see the European Union, even with the Socialists now in power in France (the 2nd largest State in the EU) continuing to give money to a country that continues to spend their money without serious reforms.

What Greece is going through right now, is similar to what America is going through where the countries are divided down the line. And doesn’t like either party enough, to give them enough power to run the country. So they shift back in forth in America, between Democrats and Republicans. In Greece between Republicans and Socialists. And only the people of these countries can figure these things out for themselves.