From The Cold Turkey

For the life of me I don’t understand why today’s so-called Progressives ( radical hippie, Socialists, Communists in actuality ) love affair or admiration with Fidel Castro and Hugo Chavez. Progressives are supposed to be people that are about progressive through government action like democracy and yet they defend people, who are anti-democratic. Who’ve attempted to centralize power with their presidencies, in President Castro’s case, have been successful in doing that. President Chavez’s case still trying to do that in the Bolivar Republic of Venezuela, still has that official name. 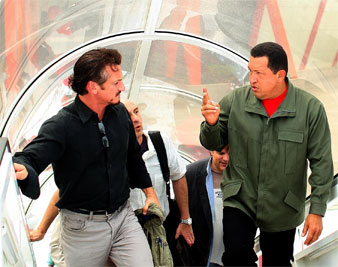 But if President Chavez is successful, they’ll basically be another Communist Republic in Latin America. He’s already been successful in nationalizing the energy industry, as well as at least certain parts of the media. But Venezuelan Democrats still have media outlets they can go to but in President Castro’s case, it’s official he’s had a Communist State in Cuba for over fifty years. This guy is not a democrat and never has been, he’s not even a Democratic Socialist, he’s a Statist, who wants his people to be subjects of the State. And Hugo Chavez is one of Fidel Castro’s biggest admirers.

So why would Social Democrats or Democratic Socialists, people like Sean Penn who I generally have a lot of respect for, respect him more as an actor ( but that’s a different story ) be standing up for people who are anti-democratic? First it’s Castro, now it’s Chavez, who is next President Vladimir Putin of the Russian Federation? Who’s not a Communist but certainly a Statist, who’s really Russia’s version of a Nationalist.

I can understand why Democratic Socialists would speak highly of European Socialists or Canadian Socialists, but all those people are Democratic Socialists. Those are the people that regressive so-called Progressives like Sean Penn and others should be speaking highly of. Not Communists in Cuba, Venezuela or anywhere else, people who hold their own people down, because they don’t want them to be powerful on their own. Fidel Castro and Hugo Chavez aren’t people to be admired, unless you are a Communist.

Not Progressives seem to have this notion that Americans, especially the Federal Government, have no right to criticize people in other countries. Because we aren’t perfect, that we can’t speak out against voter fraud in Venezuela or anywhere else. Because we have voter fraud in our own country. If that was the rule, then no one would ever be able to criticize anyone else. Because no one is perfect and this would be a very quiet world.