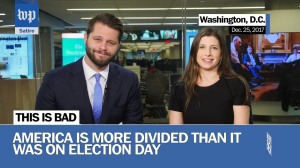 Imagine a President Hillary Clinton if you can just for a minute and especially considering the current President of the United States., that shouldn’t be too scary.

Millions of men who are on the Alt-Right and the Nationalist -Right in America, would be protesting daily about what they see as a radical feminist Communist in the White House, who seeks to eliminate all forms of masculinity and manhood. And transform all the wealth from Caucasian-Americans, to all racial and ethnic minorities in the country.

Had Hillary Clinton won the presidency, Republicans would probably still control the House, but there’a a reasonable chance that Democrats could have won back the Senate, because there would’ve been a higher Democratic turnout in states like Pennsylvania and Florida. And perhaps Democrats would have won the Senate even if there was a 50-50 split. And we would see House Republicans launching new investigations in to the lives of the Bill and Hillary Clinton. Making the Ken Starr investigation from the 1990s look like not just a fishing expedition, but fishing festival. Wait, the Ken Starr investigation was a fishing expedition.

Perhaps the Christian-Right leaves America and goes to Saudi Arabia or Iran, where its still okay and acceptable to treat girls and women like property. Since they’ll no longer be able to do that with a Clinton Administration in America. Judge Roy Moore would be one of the first so-called Christian-Conservatives packing his bags and out on the first flight to Riyadh or Tehran.

We’ll never know this for sure, but we do know that you still have a large Donald Trump base in the Republican Party who views President Trump as their cult leader. And won’t criticize anything that Trump does including not paying his taxes, because Donald Trump is their cult leader. And if he does something it must be okay to them because he did it. And no godlike cult leader can ever be wrong according to them. But without a Donald Trump, these Republicans would return back to Planet Earth at least even if its just for a visit, to stop at all costs Hillary Clinton from doing her job as President of the United States had she won in 2016 and try to prevent her from finishing her first term.