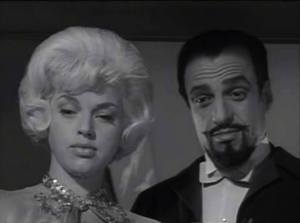 If you’re familiar with the movie Berserk from 1967, The Sorcerer Apprentice should look at least somewhat familiar to you. Diana Dors, is in both films. In Berserk, she plays an assistant to a magician at a circus. In The Sorcerer Apprentice she plays an assistant to a magician at a carnival. In Berserk, she thinks she knows who the killer is. In The Sorcerer, she puts the killer up to killing her husband. In neither film is Diana an angel, she just looks like one in both films. As well as anything else she’s ever done, but that is one of the reasons why she was a great actress. Because she could fool people with her hot baby-face looks and play the killer, or a killer angel as well as it can be played. If you’re familiar with the movie The Unholy Wife, where she tries to frame her husband for killing his best friend, you should have an idea what I’m talking about here.

The Sorcerer Apprentice, looks very entertaining to me, but I’m not sure it is very believable. You have a sick kid (I guess) who should be back in the institution that he escaped from (no joke) who gets picked up off the street by a magician. Who picks him up in real-life and is no trick, (ha hah) who I think can tell this kid is not completely there and is told by the kid that he’s escaped from his home. And decides to take him in anyway instead of reporting him to the proper authorities. (Damn! That sounds corny.) Again Diana, is no angel, she just looks like one and can tell Hugo (the kid) likes her and is attractive to her and she’s cheating on her magical husband (lets say) the magician and wants to move on from him. And tries to put the kid up to killing her husband. The kid is at least 4-5 beers short of s six-pack and thinks this would be fun or something.

You would think this couple having seen this kid and figuring out that he’s not completely there and needs close supervision (to put it mildly) and are less qualified to take care of kids than the guy who freaks out when he finds out that his girlfriend is pregnant with his baby and ditches her, that they could give him a bite to eat, find out where he came from, if not turn him in and move on. But instead they keep him around even though they are too busy to take care of him and probably don’t want to either. But no! That could be too boring for the great Alfred Hitchcock. Instead of making it a boring everyday story, they make a killer out of this gorgeous baby-face wife whose cheating on her husband with a high-wire artist (whose probably scared of heights) and this unfortunate boy. Who perhaps nobody wants to take care of him and has really no one who loves him. Just one example of why Alfred Hitchcock was such a great director.
Alfred Hitchcock: Alfred Hitchcock Presents- The Sorcerer’s Apprentice 1961