Constitution Daily: No Taxation Without Representation! 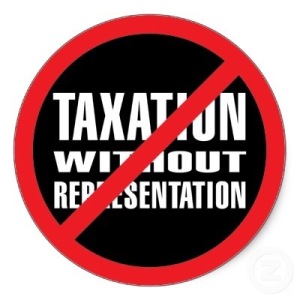 It is not often that I blog about no taxation without representation and perhaps I should blog about it more, because it is a clear issue as well as constitutional violation. To require people to pay for services and government that they have no say in when it comes to Congress in whether they should pay for those services, or should those services even exist in the first place. When I think of jurisdictions in America that are actually subjected to taxation without representation, Washington DC, where I live just outside of in Bethesda and the Commonwealth of Puerto Rico, come to mind real fast.

They both have official representation to Congress with each having a non-voting delegate in the House of Representatives. But neither even has a member in the Senate. To jurisdictions and yet between the two of them they have two members of Congress. When the fifty states including Alaska and Hawaii, all have at least three members of Congress. They all have at least one representative in the House and two senators in the Senate. And yet they both pay Federal taxes and in Puerto Rico’s case, they don’t get money back from the taxes that they pay in services. For example, Puerto Rico, doesn’t get money from the Affordable Care Act for things like Medicaid. And have to find other ways to cover their uninsured. Even though they pay taxes on it. One example of why they’re bankrupt.

This is very simple. If you’re going to charge people in the form of taxes for government services, then they should get a say in that through voting directly, or having elected representatives vote for them with their constituents getting to decide if those representatives should continue representing them, or not. Washington DC is strange, at least compared with a lot of the country and how they’re physically set up is just one example. Physically, it’s a city and a very urban one at that. Big city in population with six-hundred and fifty-thousand people or, so in area of six-million people. One of the biggest cities and metro areas in the country. But the city itself is small in size even for a big city and yet they are forced to function as a city, county and state. For example, they have to run their own prison system while every other big city has a state that does that for them.

Puerto Rico, about the size of Connecticut in population without four-million people and New Jersey when it comes to land, essentially functions like a state. It has what would be called everywhere else a state government, with an executive, legislature and judiciary, with county and municipal governments as well. Except they don’t get the services that they pay for in taxes and don’t have representatives in Congress in either the House, or Senate, but they still have to pay the Federal Government for the services that the rest of the country receives. These are clear examples of taxation without representation, that Puerto Rico could fix on their own by either voting for independence and becoming their own country, or voting for statehood and becoming the 51st state in the United States. Washington DC, would be better off as part of another state, just because of its size. Like being part of Maryland, but the Federal Government would have to decide that themselves.