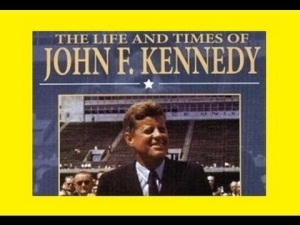 Another film about the life of John F. Kennedy our 35th President of the United States. This came out in 1964 less than a year after President Kennedy was assassinated. And he was already pretty popular as president in 1963 when he was killed and if anything he became more popular after he died. Perhaps because of all the questions rising about who killed him and did the assassin, or assassins have help is assassinating him in Dallas, Texas. I believe a lot of Jack Kennedy’s support comes from Hollywood. He was really our first hip president and had he been elected in the 1980s, or even in 1976, he would have been seen as a cool president. President Kennedy, did have same major accomplishments in his short time as president, but most of them had to do with foreign policy.

Jack Kennedy today I believe is both very popular personally, but his policies and politics and what he advocated are very popular in the country. He was a true Social Liberal who believed in both economic and personal freedom, as well as a safety net for people who truly need it. And because of this you even have Republicans who say they support Social Security and Medicare, as well as a public safety net for people who truly need it. JFK believed in a strong defense, but didn’t believe that America should, or could police the world by themselves. And again this is where Americans tend to be. We’re not dovish as a country, or neoconservative when it comes to foreign policy. We want to be able to defend ourselves and help people around the world, but not have to do everything ourselves.

So back in the early 1960s I believe a lot of the reasons for JFK’s popularity had to do with the fact that he was hip and cool. That Hollywood liked him and saw them as one of them, that he had friends in Hollywood. And that he was very different culturally from a lot of the president’s that had come before who were very traditional culturally. JFK also had a beautiful young hip wife in Jackie that the country including Hollywood loved and saw her as royalty. They were ahead of their time culturally in an era that was finally moving away from the 1940s and 1950s and into the 1960s which looked almost completely different as a decade as far as the role of women, how people lived and talked, the types of entertainment that was coming out. And these are I believe big reasons for the popularity of John Kennedy.