This is one of the best NFC Final’s of all-time for lots of reasons. The 49ers and Redskins are not just the two best franchises in the NFC in the 1980s as far as all the games and championships they won and their two head coaches Bill Walsh and Joe Gibbs. But they were the two best franchises in the NFL in the 1980s, as far as wins, championships and head coaches. And yet they only met in the NFC Playoffs once that decade, which is this game. The Redskins tended to play the Chicago Bears, or the Los Angeles Rams in the 80s. The 49ers played the New York Giants, Dallas Cowboys and Minnesota Vikings multiple times each.

This was also a great game because of these two teams. Both teams very good on both sides of the ball. The 49ers had a better all around defense as far as defending the run and pass. The Redskins were great against the run and had a great pass rush and tackled very well. But if the quarterback had time, they were a very vulnerable in the secondary. Because they didn’t have much speed or a great cover corner back there. Darryl Green was a rookie and not a great player yet. Both teams were great on offense with great quarterbacks, passing games and running games.

This was also a great game because of the contrast in it. The Redskins passed and ran very well, but they were a power run team first with John Riggins and then they would run Joe Washington outside. And go deep to either Art Monk or Charlie Brown outside. And hit Clint Didier and Joe Washington for shorter and medium routes. They could throw the ball everywhere and had so many weapons. The 49ers were a pass first team, again with multiple weapons at receiver, TE and running back. And then could run with Wendell Tyler and Roger Craig. Two great all around football teams who played the game differently. Which made for a great NFC Final. 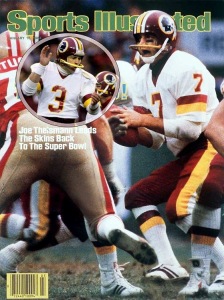