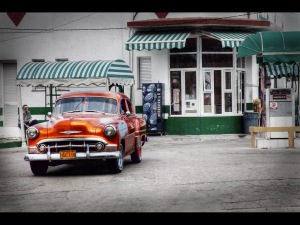 I agree that opening up the Cuban telecommunications industry and allowing for others to be involved there outside of the Castro Regime is a way to not only open up Cuba and open up a better relationship between America and Cuba, but the two government’s, is not only a good way to open up Cuba, but also a good way to open up the Cuban economy. The Castro Regime decided in the late 2000s or so that Marxism was failing in Cuba and that their state-owned economic system simply wasn’t working. Which is when they started opening up their economy to private investment and allowing for Cubans to start their own business’s. And sell off some of their state-owned business’s to the Cuban people.

But what has also failed is the American-Cuban Trade Embargo. A unilateral decision by the Eisenhower Administration in the late 1950s to end relations with the Cuban Government and stop trading with them. After the Castro Communists came to power in Cuba and started nationalizing a lot of the Cuban economy. While Europe, Asia and South America, Canada and Mexico continued to trade and relate with Cuba, America was on the sidelines. And stayed on the sidelines until the last few months believing that not trading and isolating Cuba would end the Castro Regime or at the very least get them to respect the human rights of their own people and act responsibly. That has obviously failed as the Castro Regime has been in power for fifty-five years now.

You open up countries by talking to them and incentivizing them to act responsibly. And you especially allow for the people’s of both countries to interact and for business’s of both countries to be able to trade with each other. Which is what we did during the Cold War either every country that was aligned with the Soviet Union including the People’s Republic of China. Shutting the door on a country when the rest of the country has their doors open to that country simply doesn’t work. Sanctions can only work when other countries apply the same sanctions as well. Which is why the sanctions on Russia and Iran have worked because both America and Europe have the same sanctions. And trading and communicating with Cuba will not only improve the relations of that country and the lives of the Cuban people.