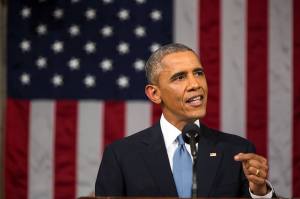 President Obama was well within his right to that with the Great Recession not only gone, but followed by real economic and job growth and now even wage growth that we haven’t had since the 1990s or so. Now the question is where we go from here to keep the recovery from not only continuing, but to keep it booming. And not only see real unemployment drop, but to see a growing American workforce with wages continuing to grow. And the President put some proposals and ideas on the floor and hopefully he follow that up with real policies in the near-future.

Three areas where I believe President Obama can work with the Republican Congress in the next two-years has to do with infrastructure, trade and tax reform. The House will at least pass the trade bills that have already been negotiated and they’ll probably pass the Senate as well with bipartisan support with at least several Senate Democrats going along. President Obama already has House Republicans at least on board when it comes to infrastructure investment. Now the question is how to fund it.

I think President Obama would be well advised to send up an infrastructure investment bill and layout how he would pay for it. It probably won’t pass the House because it would come with closing tax loopholes that generally just benefit the wealthy to pay for it. But then House Republicans would have the opportunity to pass their own bill and send it to the Senate. And they would probably fund their bill from taxes on new energy projects. And the question would be would that pass the Senate or not and would Senate Democrats accept it, or block Senate Republicans from blocking it.

If making the American economy even stronger than it is, is the top priority in this Republican Congress and I hope it is after national security, than infrastructure and trade have to bills that they pass. Because of all the good jobs that would come as a result. Keystone could definitely be part of that, but won’t be enough to rebuild this country and get our infrastructure system back to the point that it needs to be. You need a comprehensive infrastructure bill as well to rebuild this country and make our economy as strong as it possible can be.
The Obama White House: President Obama’s 2015 State of The Union Address