The Lip TV: Byliner With Walter Kirn- JFK According to James Ellroy 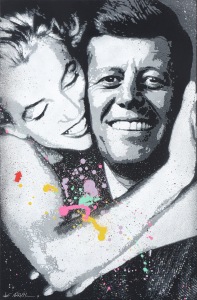 It’s no secret that John F. Kennedy loved women, at least in the physical sense and how they sounded. But it’s not clear if he was really ever actually in love with any women, including his wife Jackie Kennedy. Or was marrying her in I believe 1956 or so, was simply a political play on his part, because he wanted to be President of the United States. He already been in Congress for ten years, both the House and Senate and was looking for his next big move. Even though he wasn’t a very good Representative certainly and didn’t get interested in being a Senator at all, until he decided he wanted to be President.

And I say all of this, because James Ellroy made a very good point about Jack Kennedy in this video. That JFK didn’t want to get very close to any women and start anything real with them emotionally. That he wanted to be with them, hang out with them, especially Hollywood entertainers and of course he wanted to bang them even in the White House. Which are completely different from starting a serious relationship that builds into a long-term successful romance and even later marriage. JFK knew all of these things and knew that he also wanted to be President of the United States. Not sure Jackie knew that when they got married in the 1950s.

JFK also knew that there might have been a better chance of a gay man who was completely out of the closet, even in the 1960s getting elected President of the United States, than a bachelor. So getting married and looking like he was in love with his wife, at least in public, was critical for him to achieve his ultimate goal. Which was being President of the United States. So what I think he calculated is that he could have everything. A wife in public, women on the side and even in the White House and become a great President. His presidency died way too soon for us to know if he would’ve pulled it off.
The Lip TV: Marilyn Monroe & JFK According to James Ellroy