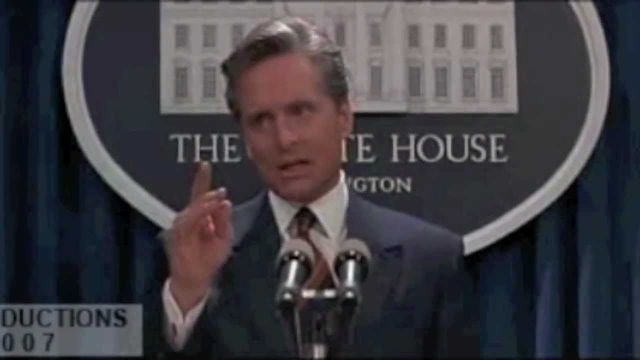 Just to be serious for a minute and perhaps only a minute: I was with President Shepard the whole time during this speech, except for the part about the guns. When he said that he was going to get the guns, not just assault weapons, but handguns in general. The Federal Government can’t constitutionally outlaw handguns by statue. The U.S. Supreme Court has made that clear. So to do that, you would either have to amend the Second Amendment or repeal the Second Amendment.

But the rest of the speech about defending free speech and not just speech you agree with and not just people you like and respect, but that the opposition and other groups of Americans have just as much of a right to speech as anyone else in America, was a classical constitutional liberal argument. That all Americans have the right to speech and that there are few exceptions to that. When it comes to libel, inciting violence, or yelling fire in public spaces and causing panics.

This whole scene came about because of the fact that President Andrew Shepard played by Michael Douglas is a widower and single father of a young teenage girl and meets a Democratic lobbyist who lobbies for environmentalists and pursues her even as President and they start an affair and fall in love. And that Senate Minority Bob Rumson played by Richard Dreyfuss, who is running for President as a Republican, makes a big deal about this. And tries to make the case that the President who even though he is a widower by the way, having an affair in the White House is an example of the moral decay of America.

All this is going on as President Shepard is trying to finish the rest of his first-term agenda before running for reelection. Which is a crime bill and an energy bill and the affair that he is having with his girlfriend, Sidney Ellen Wade played by Annette Bening, even though neither one is married at the time, costs the President popularity and support in the House of Representatives.

And the President has to settle for a compromise energy bill, which is how he loses his girlfriend. The speech in the movie was about the President fighting back and saying that: “The compromise is not good enough and that we need to go further to address crime and energy”. As well the President defending liberal values.