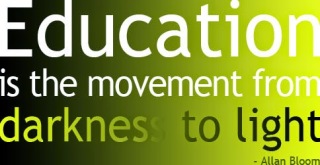 There are plenty parts of the Federal budget that I would like to cut back on and reform. Like in defense, agriculture subsidies, corporate welfare, red tape, but one area where I would like to see America spend a hell of a lot more money on as well as reforming the system would be in the areas of infrastructure, job training and education so we are more competitive with Europe, Brazil, China and Japan in these areas. Not to spend a lot more money on a bad system, or just to spend a lot more money. But to reform the system and invest whatever it takes in it to make it as effective as possible.

We could literally have a public education system in America not run by the Federal Government and still run by the states and locals primarily where every student is able to go to a good school. Where none of our teachers are underpaid and where none of our schools are underfunded including in very poor urban and areas. Where educators are paid based on how well their students are learning, not by how long they’ve been teaching. Where parents would have the choice to send their student to any public school in the district including a charter school. And where schools are funded based on need, not by where they are located.

We could do this by still having the states and locals be the first financial resource to funding schools. But where the Feds step in to provide the financial resources for schools that are in low-income districts so they have the resources that they need to be successful as well. This would require a huge investment probably in the hundreds of billions of dollars and would sort of look like a Marshall Plan but it would be domestic. And it would need to be paid for by not borrowing the money, but is something that we can afford to do.

I would make job training and education universal not just K-12 or through college, but lifelong. And set up job training centers all over the country including in ever low-income urban and rural area in the country including for United States territories and commonwealths. And make it public-private partnership and bring in the non-profits in the private sector and reward them with grants to set up job training centers and offices for low-income low-skilled adults. Where these people would be their clients and their job would be to find them the right school and educational program for that client so the client can get the education they need to get themselves a good job.

Poverty is not something that we have to accept and put up with. You have to know why people are in poverty and them empower them based on that knowledge to work their way out of poverty. And the person them self has to take advantage of those opportunities that they need to get themselves the skills that they need to get out of poverty. And not just live in poverty with a few extra bucks from taxpayers and private donations.