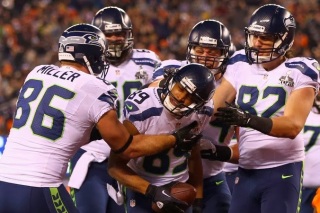 Roger Goodell and company may want to try to outlaw defense in the National Football League and try to make the NFL look like flag football, where perhaps even tackling may soon become illegal, because they believe offense makes money and defense holds down profits, turning the NFL into the AAML or the All About Money League instead of the NFL.  They are trying to get non-traditional football fans who are really only interested in celebrity culture and so-called reality TV, and perhaps are casual football fans at best, because they think some of the players are awesome or whatever. Defense still wins championships and it always will.

As Phil Clark said on his blog, you don’t need a great defense to win the Super Bowl but you can’t have the worst defense. And the only thing I would add to that is you can’t have a bad defense either. You need to at least have a good defense.  A defense that gets stops, meaning consistently, prevents the other team from scoring. It doesn’t get run over in the running game on a regular basis and doesn’t consistently give up big plays in the passing game because it has a weak secondary or a weak pass rush, or a combination of the two.

If you look at all the Super Bowl Champions, all 48 of them had defenses that were in the top 10 or near that and didn’t give up a lot of points either. You can’t say that about the Super Bowl runner ups, because several of them were toward either the bottom of the NFL or in the low twenties when it came to yardage and points given up. The 1984 Miami Dolphins come to mind very quickly and so do the 2007 New England Patriots, which were 18-0 going into Super Bowl 42 before they were upset by the New York Giants and did have one of the top defenses in the NFL that year.

There also have been explosive, high-scoring and yardage Super Bowl runner ups that were ranked pretty well in defense the year or years they went to the Super Bowl but not only lost the Super Bowl but lost it badly. The Buffalo Bills of the early 1990s come to mind very quickly, where they gave up a total of 140 points in their 4 losses, 30 or more in the 3 blowout losses, not because they had a bad defense but because they had an undersized defense going up against big physical teams with great running games: New York Giants in 1990, Redskins in 1991 Dallas Cowboys in 1992 and 1993.

And again the casual NFL fan who may only be interested in offensive football may say, well, what about the St. Louis Rams on 1999 or the Green Bay Packers of 2010 or the San Francisco 49ers of the 1980s or the Redskins of the 1980s. They were all very offensive-oriented teams that all racked up a lot of yards and scored a lot of points. True, but all of these teams, and the 49ers and Redskins specifically, were all consistently ranked high on defense in the top 10. I mean, the 1991 Redskins Super Bowl Championships team scored over 500 points, over 30 points a game, but they gave up only14 points a game and won a lot of blowouts.

The record and evidence are very clear, that if you are think about building a Super Bowl winner and you think you are going to put together a great offense and see how many points you can score that season or in that era, make sure you also invest well in your defense so you are not giving up nearly as many points and yards against your opponents as well, because when the playoffs come around, chances are you’ll face at least one good defensive team that can move the ball and score points as well that may match up well with you. And you may need to get a lot of stops in that game to have a good chance at winning, as the 2007 Patriots found out the hard way in Super Bowl 42.

As much as Roger Goodell and company may want to change this, football still has three sides of it and the NFL is not arena ball, where it is mostly about offense. You still need to play good defense and have a good special team as well, no matter how many points you score and yards you put up. Breaking offensive records doesn’t lead to championships but to having a good balanced team that scores, defends, covers kicks, kicks the ball, blocks and tackles, and so forth, which is still what it takes to win the Super Bowl.