Washington should go even further than this and legalize marijuana, but regulate it and tax it like alcohol, which would allow for them to lower their taxes on everyone else, especially the middle class and employers. And you would see even more economic development in Washington and the marijuana industry would be part of that. But other business’s as well, because the taxes on them would be lower if they invested in Washington.

1. Twenty-one or over to use, possess or sell marijuana in the City of Washington.

2. People under twenty-one caught with marijuana or trying to sell it would pay a fine on that or a short-term jail sentence, but not sentenced to prison for it.

3. Require license’s of dealers, users and seller of marijuana in Washington.

4. Tax marijuana just like alcohol and use that money to pay for needed public services. Instead of having to use current tax revenue to prosecute and enforce current anti-marijuana laws.

5. Strict regulations similar to alcohol like not being able to drive while high to use as an example. That would come with being locked up in jail if caught and convicted. 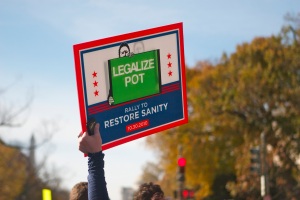