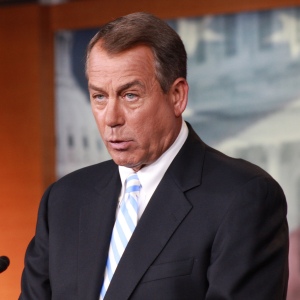 See even Speaker John Boehner the top Republican in the United States believes that attaching so-called ObamaCare language. To a government funding bill and risking a government shutdown is a bad idea at least at one point. And Speaker Boehner might still believe this is a bad strategy but is too weak to do anything about it and is just a Speaker with the title. But without the authority to do anything about it right now because let’s be real. The House Republican Leadership is not in charge of the House Republican Conference and certainly not. In charge of the House of Representatives but the Tea Party Caucus and their most radical members. Of trying to defund or repeal the Affordable Care Act at all costs. And that John Boehner is not much more than their puppet right now until they see him as no longer useful and perhaps. Find someone else to do their bidding for them.