Posted on September 9, 2013 by Erik Schneider 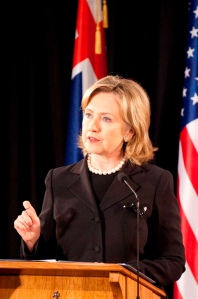 Sounds like the speech of a diplomat or a speech that Secretary Clinton would’ve given had she still been Secretary of State. I don’t think there is much doubt that she was going to support President Obama’s Syria policy especially since she had a very similar position when. She was Secretary of State so suddenly coming out against military force of Syria would make her look real bad. Even if it were to help her with anti-war, anti-military Far-Left in the Democratic Party and broader country.

As Congress is close to voting on the Syria resolution later this week. I will write why I think it should be supported but if you want a preview I’ll give it to you. And if you don’t want it I’ll give it to you anyway. We should be doing this for practical as well as national security reasons but also for humanitarian reasons and where we stand as a country. And in the world for human rights and if our values as a country mean anything. We simply can’t stand by and a watch a government led by a dictator simply murder their people. Without any consequences coming from that which would could prevent this from happening again. Because of the message it would send to other dictators in the future and there will be other countries. In the future that have authoritarian regimes that their people want seen removed from office one way or the other. And if President Bashar Al-Assad essentially gets away with murdering his people. Other dictators will take that as they can do the same thing to and get away with it.

So that is the humanitarian argument that if you let dictators murder their people. They’ll murder more and other dictators will feel they can do the same thing and get away with it. But stepping in so they can’t do that again one way or the other saves lives in their country but also in other places in the world. The fact is military force is never a good option because it comes with serious life and death consequences. But just because it is the last option doesn’t mean it isn’t an option and until I hear another option that doesn’t involve. Military force that could actually work and if you are talking about an arms embargo. Show me how you get Russia and Iran to play along and cooperate. You want to talk about national security reasons, do we really want to see these weapons in Syria used against Americans. Do we really want to see our small moderate Arabian allies as well as Turkey a large non-Arab. Ally being overwhelmed by refugees and see these countries become un-stabilized. If we can’t stop Bashar Al-Assad, how do we prevent Iran from furthering their. Weapons of mass destruction as well another country that arms terrorists that have harmed Americans.

Show me a way to prevent Bashar from murdering his own people without using military force. And not just a way but a way that can actually work something to the effect that gets. Weapons inspectors in Syria to literally strip Bashar from his weapons of mass destruction. So he can’t use them again and prevents him from rebuilding his WMD. As well as assisting the Syrian opposition in their quest peaceful or otherwise to overthrow the Assad Regime. And I’ll take it under consideration.