Some QB’s have a nice run 5-6 years where they do well and then you can say they are one of the best quarterbacks in the NFL, Rich Gannon comes to mind with the Oakland Raiders. And then there are quarterbacks who may have a short run of greatness, but accomplish so much in that period that it lands them in the Hall of Fame. Terry Bradshaw comes to mind with the Pittsburgh Steelers. But it’s hard to find many if anyone who were as great as Joe Montana for as long as Montana in the history of the NFL.

When I think of Joe Montana I think of the QB who played for the best team and the best head coach of his era. The San Francisco 49ers playing for the best offense and playing with a great defense where he for the most part didn’t have to win games on his own. Joe Cool was a possession passer who would beat you with play after play, pass after pass. And when the defense got tired of that and came after Joe, he could go deep on the defense with wide receivers like Jerry Rice or John Taylor.

And earlier Joe had Freddie Solomon and Dwight Clark. So if you want to play press coverage against Joe and the 49ers, now you are at risk of giving up the deep pass against the 49ers. Because their West Coast offense always had the deep threat in guys who would look for the big play. Especially against press coverage which is what made this offense so great because it forced defenses to defend the whole field. Short, middle and deep and Joe was the best at running this offense. 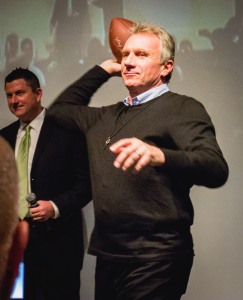