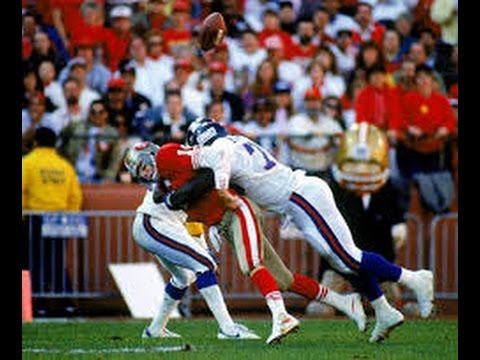 Source:CBS Sports– I believe this is the hit that was delivered by New York Giants DE delivered against San Francisco 49ers QB Joe Montana, that knocked out Montana for the next two seasons and essentially ended Montana’s career with the 49ers.

This is one of the best NFL football games, period, of all-time and perhaps the best conference championship of all-time as well. Two great teams that had a lot of respect for each other and who didn’t like each other. Whose fans hated the other team because of all the great games that they’ve played against each other over the last ten years.

The 49ers looking to make history and win a third straight Super Bowl and perhaps go down as the greatest collection of teams from 88-90 in NFL history. The Giants obviously having different plans and looking to get back to the Super Bowl for the first time since 1986 and winning another one.

The 49ers of the 1980s were obviously stereotyped as soft and as a finesse team. Even though they had the best all around running back in the league at this point in Roger Craig. Who was a power runner and ran the ball up the middle for the most part, as well as power sweeps. A 6’0 225 pound tailback with the power of a fullback and the speed of a great wide receiver. Who was both a great all around running back and a great receiver and blocker as well. The 49ers even though having a light offensive line in weight, ran the ball very well against everyone and ran the ball up the middle as well.

And the 49ers were always big and strong on defense and have a very good tough defense in 1990 like they had for most of the 1980s. But yet they were called soft because they were a pass first team that threw a lot of short passes. Playing a team that was known for being tough and strong as the Giants were with tough physical defense, big powerful offensive line and a great power running game.

This was not a matchup of a power team in the Giants vs. a finesse team in the 49ers. When the fact was both teams were two of the strongest and most physical teams in the NFL in 1990. And as a result this was one of the most physical games in the history of the NFL as far as all the big hits in it from both teams.

This game also represents the end of an era. The last time that Joe Montana would represent the 49ers as their starting quarterback and leader. Who took a huge hit late in this game from Giants defensive end Leonard Marshall. And suffered a concussion and back injury that would cost him the entire 1991 season and most of the 1992 season.

This was also the last season that 49ers would enter the year as the favorite to win the Super Bowl, or expected to win the Super Bowl. The rest of the NFL at least the good developing teams were getting better and were catching up. Including a young team that represents Dallas, Texas. So this was a very important game in NFL history.