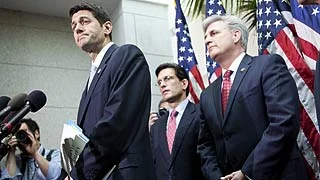 “The House on Friday approved a fiscal year 2012 budget resolution from Budget Committee Chairman Paul Ryan (R-Wis.) that seeks to drastically limit government spending next year and in years to follow.

But the vote on the measure — which imposes $5.8 trillion in spending cuts over the next decade — came after a clear sign that at least half of the Republican Caucus supports even tougher spending cuts.”

The House Republican budget passed in the House today without a single Democratic vote, as well as four Republicans voting against the budget. This budget was already DOA in the Democratic Senate, but what this means with 235 members voting for it, that even if it did somehow passed in the Senate (and cancer was cured tomorrow) that with just 235 votes, the House GOP would be fifty-five votes shy of overriding a presidential veto, which President Obama has already said he would do. If somehow the bill ever made it to his desk on Wednesday, the President once again laid out his opposition in what can be called his first campaign speech for 2012, his opposition to the House GOP budget plan.