“When wealthy philanthropist Richard Cross is arrested for the murder of his mistress’s 15-year-old sister, he secures the services of defense attorney Ted Hoffman. Within days, though, a mysterious woman comes forward to provide Cross (Stanley Tucci) with an alibi. He is released and the police quickly charge actor Neil Avedon with the homicide. When Cross pleads with Ted (Daniel Benzali) to defend Neil, the attorney accepts the case.”

Read the rest of this piece at :Classic Film & TV Cafe: Rick 29- ‘Murder One: The Sensational Season One’

Source:Apathy Monger: Murder One Season One Opening Credits– Actor J.C. McKenzie, was part of the team at Hoffman & Associates

“Murder One Season One Opening Credits” 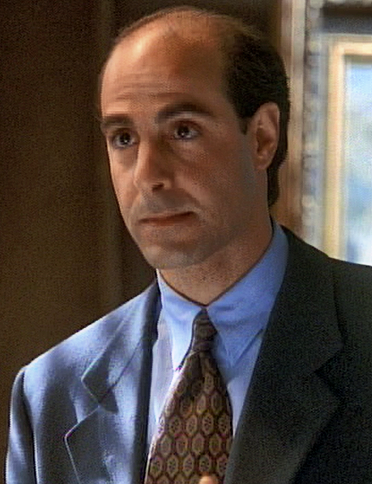 Just to give you little background about Murder One and the genre in Hollywood that it represented: in the late 1970s with superstar shows like Dallas, soap operas went prime time. Dallas with CBS, that ABC got into the prime time soap opera game with Dynasty. CBS, launched another prime time soap with Falcon Crest. NBC, with St. Elsewhere. ABC, in the mid and late 1980s with Thirty Something. Because of Generation X, shows like Beverly Hills 90210 and Melrose Place in the early 90s. And then prime time soaps just even bigger in the mid 90s with shows like NYPD Blue ( from ABC ) and then ER. ( From NBC )

Murder One, ( from ABC ) was different at least in the sense that it was a prime time soap opera dealing with the criminal justice system and that the show was almost exclusively from the point of the view of the defense team. When you saw the prosecutors, they were either in court, giving a press conference, or in communication with the defense team. And the first season of Murder One did have several other legal and criminal cases that Hoffman & Associates dealt with, but their biggest cases was the Neal Avdeon who was a Hollywood actor who was accused of killing his girlfriend.

By the midpoint of season one, Murder One was practically all about the Avedon case where the general partner of Hoffman & Associates Ted Hoffman, is completely tied up and basically has his life taken over by this one murder case and getting his client acquitted of the murder charge.

There are shows and series that seem to go on forever that I wish I had never heard of, but because they’re so popular, even though they’re so stupid where the main characters on the show are really only famous for getting into tense, heated, public arguments and fights. Where these people are basically just losers who can’t stay out of trouble. And of course I’m thinking of what’s called reality TV.

And then there are what I at least call cookie-cutter sitcoms where it’s hard to tell one of these shows from another, because they’re all basically about the same things: young to early middle age people, who aren’t married, no kids, live in lofts that are probably in New York and spend most of their time hanging out at coffee houses and places like that. And those shows go on forever, even though there’s really not much if any difference from one cookie-cutter sitcom to another other than the cast members are different, because that’s what young people are into.

Murder One, falls into a different category as a show that had a great cast, had great writers, that wasn’t like the other shows that it was competing with, but instead almost completely different; maybe only LA Law could you compare with Murder One and yet Murder One despite everything that it had going for it with the great background and depth to that show, it doesn’t make and is gone after season 2.

ABC and Steven Bochco made some fatal mistakes with Murder One: going up against ER on the same night and time slot during season one, which just killed the ratings of Murder One right off the bat. And then replacing Daniel Benzali who was perfect for the role of Ted Hoffman, with Anthony LaPaglia, who is a fine actor, but not someone you want as your lead actor in a big show like this. But Murder One, didn’t fail because it had cheesy writing, or a weak cast, weak directing, or anything like that, but of how it was managed with the tools that they had. It should’ve had its own time slot from episode one and let the show ride on its own.