Posted on September 9, 2016 by Erik Schneider 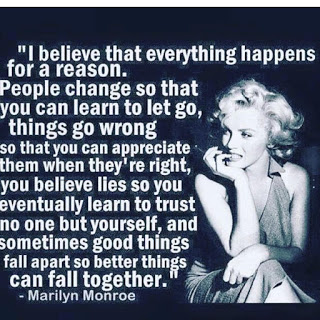 I’ve blogged this before and I’ll say this again. Marilyn Monroe, wasn’t known for saying intelligent things, at least not with people not knowing her personally. She was known as a goddess, dumb blonde, an entertainer, comedian, singer, a wild child with the baby-face of a sixteen year girl and even the personality of one. And except for the dumb blonde she was all of those things. But she was so much more and even those she was immature and lack self-discipline and self-confidence, which is shocking if you just look at her and see that smile, she had this keen blunt way of seeing things for what they are and knowing exactly how to describe them and put things and people in their place. She had a keen sense for commonsense about life outside of her. Even if she didn’t show much of it when living her own life. What’s she saying here in this quote is not something that makes people think, “I wish I thought of that.” Instead it’s more like, “I wish I remembered that, so I could see things what they were and take life as it comes and make the best of it.”

Things to happen for a reason. Which sounds like a quote from Captain Obvious, but it’s so true and if more people just saw that instead of thinking their life is collapsing because they’re facing some hardship. It’s not whether something for good or bad happens in your life that is key. The question is how does that change you and what do you do about it. Being poor at any point in your life is only a life sentence if you make it one for yourself. You don’t improve yourself, you don’t get yourself the skills that you need to live your life, you don’t make the necessary lifestyle adjustments needed to be able to move up in life and you’ll remain poor. Instead of saying, “I hate poverty, so I’m going to do what it takes to get myself out of poverty.” And that is just one example and when something positive happens in your life, you should know why and how that happened, so you don’t take it for granted and stay on that positive course. Whether you get a promotion at work, get a great girlfriend, whatever it might be.

One way I would describe Marilyn Monroe, is that she has a Ronald Reagan knack of commonsense. (Sorry my fellow Democrats) The Gipper had an ability to put things as they are and put them in a way that anyone basically could understand. That is how someone wins presidential elections with 56 and 59 percent of the vote and wins 93 states in two elections. Because you show strong leadership and layout a vision and character that everyone can understand. Even if they vote for you or not. Marilyn Monroe, was fifteen-years younger than Ron Reagan and politically very different, but she had that same ability of putting things in a way that everyone can understand. And not introduce knew language and facts, but instead remind people of commonsense that almost everyone knows. That perhaps we forgot, because it’s so common and perhaps seems so ordinary and perhaps old school and we feel the need to simply be different and fit in with current times. Marilyn was great at putting things exactly as they are and for that reason alone is worth being missed.