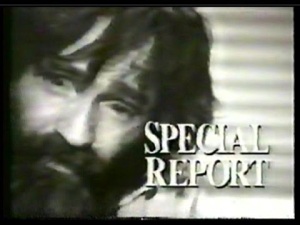 Source:The New Democrat– Hardcopy of Charles Manson. Ha, get it!

The Manson murders twenty years later. Actually twenty years after The Manson Family murderers were convicted of those evil murders. I mean when I think of evil serial murderers Charlie Manson and Ted Bundy are at the top of my list at least when you’re talking about individuals. The KKK as a group are probably just as bad though. Manson ordering murders of people because they were literally part of the successful establishment. Imagine that as your defense in court. But not only that, but ordering the murders of the wrong people. He wanted Dennis Wilson murdered and wasn’t aware that Wilson had moved out and other people moved in. Roman Polanski and his girlfriend Sharon Tate.

Charlie Manson wasn’t a dumb person. Certainly uneducated and not educated in the traditional sense. But we’re talking about someone who didn’t functioned properly mentally. Who lacked moral character, actually didn’t really have any. Who believed he was above the law and that somehow these murders was benefiting society or something. Even though again he ordered the murders of the wrong people in the sense that it was Dennis Wilson that he wanted murdered. And his crew didn’t realize that Wilson no longer lived there and that new group of people are now using that home. The Manson Family soldiers I guess who were made up of high school and college dropouts and people who were kicked out by their parents, didn’t understand that.

Charlie Manson created a cult of evil an even culture of evil. I guess he was pissed off at society after leaving prison for the last time in his life and was looking for a way to get back at the people that he believed wronged him. We’re talking about a man who grew up in prison and at 32 in 1967 had spent more than half his life in prison. And even though prison was always the best and most comfortable place for him in life he now believed he was going to punish the people for sending him there. And he finds his societal dropouts in the Manson soldiers with the young women, Tex Watson and others and now had the crew to commit the evil acts that he didn’t have the balls to do himself. Charlie Manson is the perfect example of why we have life in prison and life without parole in prison. Because you don’t want people like that living freely ever again.

Full-time blogger on a multiple ray of topics and subjects, because of multiple interests.
View all posts by Erik Schneider →
This entry was posted in The Manson Family and tagged Charles Manson, Doug Bruckner, Hardcopy, Manson Family Murders, Terry Murphy, The 1960s, The Manson Family, True Crime, True Crime Stories. Bookmark the permalink.