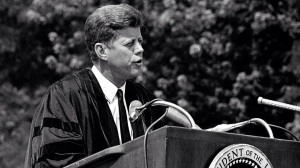 I believe the whole point of President Kennedy’s speech here is that as different as the American and Russian form of government’s and system’s during the Cold War were, that the American and Russian people actually have a lot more in common that a lot of people tend to think. That we all live on the same planet, breathe the same air, cherish our children’s future and so-forth. That as bad as the Russian communist system was, there were plenty of things to actually like about the Russian people and Russian society. The only thing a superpower war would’ve brought America and Russia, is mutual destruction.

I think what President Kennedy was calling for was to find ways where America could work with Russia on their common interests and actually learn from each other. That both countries were going to do their things so to speak and promote their interests and system’s, but trying to destroy each other was simply not an option. Because both countries would end up destroyed essentially even if one of them were to come out looking a little better. As long as the Cold War was, the United States and Soviet Union, never went to battle with each other physically. Because they were both smart and sane enough to know the consequences of such a war.

I believe had President Kennedy lived and finished out his presidency, he probably gets reelected in 1964 against Senator Barry Goldwater. And this peace through strength strategy that I believe he was laying out here would have gone into effect. That America, would have continued to be as physically and economically as strong as possible, but not to physically destroy the Soviet Union. But to show them that they can’t destroy us and that are economic and political system’s are so much stronger than their’s and that it would be in their best interest to work with us. Simply because they would never even be strong enough economically to even compete with us with their Marxist system.
C-SPAN: President John F. Kennedy’s Peace Speech