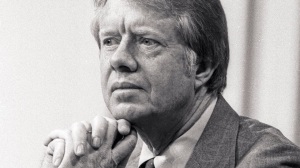 Source: The National Journal– 39th President of The United States

Jimmy Carter, is one of those president’s who looks a lot better 30 years later than he did, really at anytime he was in office. By late 1977, President Carter’s approval rating was dropping he never gained any of the political momentum that he had when he entered office in January, 1977 with a Democratic Congress. That had a 2/3 majority in the House and a 3-5 majority in the Senate. Where Democrats and Republicans were becoming the Democrats and Republicans that they are today ideologically.

President Carter, had the economic crisis, or economic malaise and the Great Deflation on his plate. Which was at it’s strongest point by 1978 and the economy goes back into recession in 1979. High inflation, high interest rates, high cost of energy, energy shortages, the rise of Japan economically, all of these things led to a very weak American economy. With so many Americans simply struggling just to pay their bills. All of these things that the Carter Administration inherited, not created, but serious problems that they didn’t seem prepared for and have any answers for.

And then you go to foreign affairs, where America was still prompting up the Shah of Iran and seemed to not have any idea how unpopular he was at home and that the young people there especially wanted the Shah to fall. And be replaced by a different regime. I’m not sure it’s clear yet if they wanted the Shah to be replaced by an authoritarian Islamic theocratic dictatorship. But hated what they had in their leadership and President Carter and his team telling people in public how great a leader the Shah was with again not knowing how unpopular he was at home just made things even worst for everybody. So that is sort of the negative aspects of the Carter presidency.

The positive side and really the brilliance of Jimmy Carter and where he really is the Richard Nixon of the Democratic Party as far as pure intelligence and knowledge and the ability to see things way out in the future as happening in the short-term that know one else could, has to do with where the country was going politically and where the Democratic Party was going. President Carter, knew the days of the New Deal and Great Society were over. Not the support of those programs, but that America wasn’t looking to pay more in taxes and take more money out of their wallets to pay for knew welfare programs. That they believed there was a limit to what government could do for them.

I believe that President Carter, started to move the Democratic Party back to the Center-Left. We go from the George McGovern and the New-Left running the Democratic Party in 1972, to a Center-Left New Democrat in Jimmy Carter in 1976. Someone who didn’t believe in an expansionist unlimited government that could do practically everything for people if they just give them their money, or have it taken away from them in higher taxes. Carter, believed that government needed to be more practical, live in a budget and watch what it spends. Use government more to empower people to take control over their own lives. Instead of using government to manage people’s lives for them. Jimmy Carter in 1976, paved the way for Bill Clinton in 1992. Similar to how Barry Goldwater in 1964, paved the way for Ronald Reagan in 1980.

When it comes to foreign affairs. Who was the U.S. President that made human rights and freedom part of his foreign policy? President Jimmy Carter and he did that as part of his 1977 Commencement Address at Notre Dame. One of the best foreign policy speeches and speeches about human rights that you’ll ever hear an American President give. Which will be up on this blog hopefully next week. Where he said that, “recent democratic development’s and movement’s in Greece and India would free up the United States from the inordinate fear of communism that one led America to ally itself with brutal dictators who agreed to help fight the communist menace. What was needed in the New World that America faced was a policy based on constant decency in its values and optimism.”

The so-called Eastern Bloc of Eastern European Communist States in Slavic countries like Poland and Czechoslovakia, that were considered Russian satellite states during the Cold War, fell in the 1980s and the former Eastern Germany was part of the Russian bloc as well. The movements that led to those authoritarian regimes falling in the 1980s and led to democratic government’s coming to power there, said that President Carter’s 1977 human rights speech was part of their inspiration. President Ronald Reagan, gets a lot of credit for those communist states falling and perhaps he deserves some. And a lot of those states fell under President George H.W. Bush. But the fact is those movement’s started under President Carter’s watch and his administration helped them. The famous military buildup of the 1980s that partly led to the end of the Cold War, started under President Gerry Ford and President Jimmy Carter.

Egypt, recognized the Jewish State of Israel during the Carter Administration. Still the only Arab state to do that and that wasn’t an accident either. And Egypt and Israel have been at peace ever since. It was President Carter that brought Egypt and Israel together to sign the 1978 Camp David Accords between Egypt and Israel. Which meant that Egypt would recognize Israel as a Jewish State and that Israel would give back some of the land that it won during the 1967 Arab-Israeli War. And what would become what is known as the Palestinian Authority today, which is essentially the State of Palestine was part of that agreement as well. Where Israel would pull out of the West Bank and Gaza in Palestine and be replaced by a democratic Palestinian government.

How about the Panama Canal Treaty of 1977, where America finally gave up the Panama Canal to the Republic of Panama. Ending some American colonization in Latin America. And allowing for Panama and the Panamanian people to take control of their own country and land. Neoconservatives, obviously hated this, but this has been one of the most successful treaties that America has ever signed. President Carter, recognized the People’s Republic of China in 1979. And the United States normalizes relations with the Communist Regime there, the largest country in the world in people. And they have remained one of our largest trading partners ever since. President Nixon, went to China in 1971 and got the ball rolling there. But President Carter and his administration got the ball in the end zone.

Energy policy, which has both to do with out economic policy and foreign policy. President Carter, knew that one of our foreign policy problems and economic problems had to do with the over reliance on Middle Eastern oil and foreign oil in general. A big reason why we were so close to the Shah of Iran and the Saudi Kingdom all of these years. Because we’ve needed their oil so much, even though they were both authoritarian states. President Carter, knew that we needed to get off of foreign oil and become energy independent. That we had all the resources to do that and that it was just a matter of developing them. He actually got an energy policy out of Congress in 1977 that started the development of alternative renewable energy sources in America. Solar and wind, are a couple of examples of that.

Not trying to make Jimmy Carter look like one of our top five greatest president’s, or even a great president. The reason why he lost reelection in 1980 had to do with his administration’s inability to deal with the economic and energy crisis of the late 1970s and political situation on the ground in Iran that led to the 1979 Islamic Revolution there and Iranian terrorists taking American hostages there in late 79. But to look at President Carter as a failure and as a weak President when he actually had a lot of great accomplishments during his term even just in four years, similar to President George H.W. Bush, is a big mistake.
PBS: NewsHour- Former President Jimmy Carter Says Recent Liver Surgery Revealed Cancer