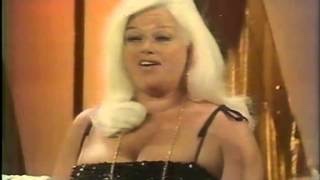 I love it when Diana Dors, first comes to America. Just wish she spent more time here and did more here, because she would’ve had a great career in Hollywood if she wanted it. And not just of been a sex symbol, but someone who was also a hell of an actress and a very versatile as well.

But I also love it when she brings out her personality and her sense of humor. Because she had a lot of both. And physically, she might have been the Marilyn Monroe of Britain. But she was better, at least in the sense that grew up and matured. And just looked as cute as a baby most of her life. But she grew up on the inside and took care of herself. Unlike Marilyn, who acted the way she looked.

Merv Griffin, apparently liked panel discussions and brought on several guests at the same time. And in some cases at least the guests wouldn’t know each other and perhaps not have much in common. Which backfired at least one time that I know of. When he had James Brolin and Dennis Hopper on at the same time. And Brolin, accused Hopper of something to the effect of spilling a lot of garbage. I would’ve been nice had Merv interviewed Diana one-on-one and did a ten-minute interview. Because he was a good interviewer and she was a very interesting person and not just great to look at.

Diana, died in 1984 at I believe the age of 52. So in that sense she lasted longer than both Marilyn, who died at 36 and Jayne Mansfield at 34. And Diana, did 34 films and actually had a pretty good career in length and substance.

But back then even, when the average American and Brit was living into their seventies, to die at 52 when you’re still a middle-age person, is dying while you’re still fairly young. She still looked great at this point and was still baby-faced adorable with the great body and could still turn young men on. And yet she dies just five years later. It would’ve been nice to of had Diana around as long as Elizabeth Taylor, who with all of Liz’s problems in life, made it to 79. Because Diana, is one of the best stars of all-time.