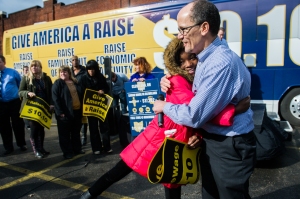 Secretary of Labor Thomas E. Perez hugs Jesseca Hudson, 11, of Cleveland after talking at the SEIU District 1199 building in Cleveland on Friday March 28, 2014.

The so-called conservative economist in this piece, said something that is simply false and perhaps even insulting to minimum wage workers, that I have to correct, or I don’t think I would be doing my job. He said that if you force employers to pay minimum wage workers more than they are worth, that will cost jobs, because employers would find robots to replace those employees. Well, if you’re a cashier at a fast food restaurant, or retailer, or grocery store, you’re an essential employee. Why, because without those employees, those business’s couldn’t stay in business. No one has yet to invent a robot that can do the job of a fast food cashier, or cook. These restaurants have to have those employees in order to stay in business.

So this idea that these positions are only worth the bare minimum, or even less than that for people who believe the minimum wage shouldn’t even exist, is simply not true. Because without these employees, these business’s couldn’t operate and serve their customers. So given all this minimum wage workers are simply underpaid, because their employers have to have them in order to stay in business. And not only do these employers get away with underpaying their employees, but they are able to pass the cost of living of their employees, that don’t cover at all in many cases other than the minimum wage, onto hard-working middle class taxpayers. Who not only struggle to cover their own cost of living, but have to cover at least part of the cost of living of minimum wage workers. Because employers simply underpay and under benefit their essential workers.

One thing that I agree with Democratic Socialist Senator and Democratic Party presidential candidate Bernie Sanders on and I you’re familiar with my blogging, you know it’s not a long list, but he’s said that if the Federal minimum wage kept up with inflation from where it was in 1968, it would be over twelve bucks an hour right now. So-called Conservatives and Libertarians, like to say that the market should decide what people are worth. But the market doesn’t decide that, employers do. Employers are only part of the market. And the Federal Government shouldn’t decide what everyone is worth either.

But employers shouldn’t be able to pass their cost of doing business and their employees compensation on to the backs of hard-working middle class workers. That money should go from the employer to their employees. With a twelve dollar an hour minimum wage. Along with having employers pay their share in payroll taxes to cover public assistance programs. Instead of workers having to pay for all of that themselves.