I don’t want to sound overly partisan here, but this was one of the ugliest anti-American, anti-liberal democratic, illiberal periods in American history. Where Americans were judged by who they associated with and political causes they supported and political candidates they may have endorsed in the past. Instead of being judged by their character and how they conduct themselves and the jobs that they do and what they contribute to America. And this period of the late 1940s early 1950s look like how elements of today’s so-called Tea Party treat Americans that don’t believe the way they do and share their culture and political values.

This period between 1947 or so when Republicans won back Congress both the House and Senate up until Senator Joe McCarthy’s so-called investigation of supposed Communists in the U.S. Government is Ann Coulter/Rush Limbaugh or Mike Savage Neoconservative Utopia. They accused Americans of supporting things that they claim that they don’t. Which is fascism and telling Americans that they disagree with politically that they are Un-American simply for exercising their constitutional rights of Freedom of Assembly, Speech and Thought. As well as privacy which has never been popular with the Far-Right in America anyway.

People in Hollywood were simply denied jobs and the ability to earn a living simply because of who they may have associated with in the past and political candidates they may have endorsed. Not because of movies that they made or roles that they played and how they played them and how they made movies. But what they did in their personal and free time. Endorsing political candidates that members of Congress both in the Republican Party and Democratic Party and executives in Hollywood saw as dangerous. And this is one of the ugliest periods in American history both in Hollywood and in the U.S. Congress. 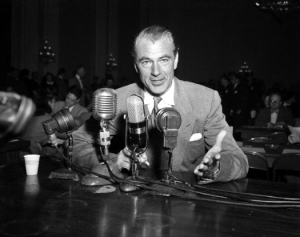